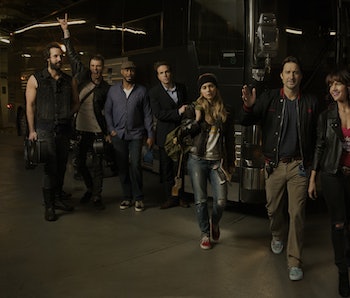 On June 26, Cameron Crowe’s Roadies will premiere Showtime. Given his recent output, whether that’s good news or bad news remains to be seen.

The show follows the comedic adventures of the road crew of the Staton-House Band. Anchored by Luke Wilson and Carla Gugino, the series is mired in the kind of rock nostalgia that once earned Crowe heaps of praise from both critics and legions of fans. In the wake of the critical drubbing given to Aloha, Crowe’s last movie, the director whose work once commanded complete attention is now in somewhat desperate need of a success.

But is Roadies the story that will get the job done for Crowe? At a glance, the project smacks of a nostalgic cash grab, something designed to capitalize on Crowe’s most famous film. Even if that was true — which it’s not — this is one hour-long comedy that’s shaping up to be something really special. It just may be one to watch when it finally hits the air later this month.

The Rise and Fall of Cameron Crowe

Though it doesn’t get mentioned much any more, Crowe actually first made a name for himself writing the screenplay for Fast Times at Ridgemont High, based on the novel he also wrote. In less than a decade, Crowe climbed his way from high school comedies (first directorial effort: Say Anything …) to Oscar-contending smash hits like Jerry Maguire. In the process, he established himself as a director who prided himself on delving deep into the overlooked characters around us.

In 2000, Crowe won the hearts of teenagers across the country with the release of Almost Famous, the rare film that basically had “instant classic” branded on the cover from the moment it released. At the time, Roger Ebert opined, “Almost Famous is about the world of rock, but it’s not a rock film, it’s a coming-of-age film, about an idealistic kid who sees the real world, witnesses its cruelties and heartbreaks, and yet finds much room for hope.”

Set in 1973, Almost Famous is the semi-autobiographical story of a teenage journalist who cons his way into a job writing for Rolling Stone, and gets an unvarnished look behind the scenes at an up-and-coming band as they embark on a national tour. At its core, it’s the story of a group of people who are flirting with real fame while struggling to keep their shit together.

On paper, Almost Famous may sound a little hokey. Trying to pin down the charm of its nostalgia-fueled sentiment is difficult (Ebert began his review calling it the cinematic equivalent of a hug), but the movie’s story is enthralling as the face value tale of a band on the verge of stardom and poignant for the universally relatable lessons that Crowe’s 15-year-old protagonist learns along the way.

If Cameron Crowe is hoping to regain a little bit of his luster, he’s certainly chosen the right cast to get the job done. In addition to tour manager Wilson and production manager Gugino, Crowe has stocked the backfield with a host of talented actors.

Imogen Poots is standing in for the youth demographic, with additional supporting turns from Game of Thrones’ Keisha Castle-Hughes, Ron White, Machine Gun Kelly, Luis Guzmán, and Rainn Wilson, who will be turning up in at least one episode as a pompous music journalist.

It’s an ensemble that’s both uniquely likable and incredibly diverse — except for one unifying trait: Each cast member has at least one project on their resume that’s won them individual praise for their talents. From small indies to huge blockbusters, the cast is bringing with them (hopefully, at any rate) a built-in audience. Whether or not Crowe is up to the task remains to be seen (but it’s looking good).

In spite of the “I need a hit” timing, Roadies is a longterm project for Crowe, one that began eight years ago with a conversation with series producer J.J. Abrams. Given his extensive experience backstage, Crowe is uniquely equipped to tell the story of the road crew from an authentic vantage point.

According to the creator, each episode of Roadies will focus on one tour date and the resulting hubbub involved in getting the unseen (and unheard) band on stage. As Crowe told Entertainment Weekly, “We never see the band, we never hear the band. It’s about the people. It’s about that girl and those people that disappear when the lights go down.”

The show’s narrative focus — recreating the “the family and the circus that exists behind the curtain” of a major musical tour — is classic Crowe, something that plays write into the writer-director’s wheelhouse. Each time in his career that Crowe has involved himself in music-tinged comedy-drama, the result has been an immediate classic.