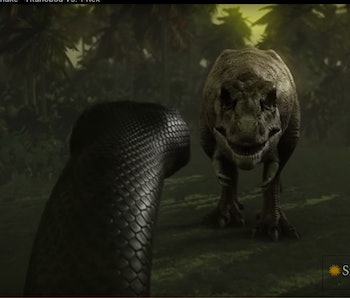 The Tyrannosaurus Rex — “tyrant lizard king” to Latin translators — may reign as Earth’s most famous extinct predator, but it wasn’t the most terrifying animal alive in the late Cretaceous period. In fact, the T-rex wasn’t even the biggest carnivorous dinosaur — that throne was usurped by, arguably, Giganotosaurus, and, certainly, Spinosaurus. The age of the dinosaurs, and epochs since then, have also featured many non-dinosaur giants that could have held their own, if not delivered serious whoop-ass, in a fight with the king of lizards (who actually, let’s face it, was more like a giant bird with sharp teeth).

Here’s how the three most serious heavyweight fighters the world has ever seen would have matched up against T. Rex.

This is the most exciting match up, because there’s evidence that this fight actually went down. Deinosuchus was a giant reptile in the crocodile family that lived 80-73 million years ago. It coexisted with some large dinosaur and certainly snacked on them from time to time. The beast looked a lot like today’s crocodiles, only enormous — it could grow 35 feet long and live 50 years. A couple of tyrannosaurs have even been found with bite marks on bones that match the jaw of Deinosuchus. In one case, the wound showed evidence of healing, which means that a true fight took place, and the croc wasn’t merely scavenging. It’s hard to say for sure which beast was the hunter and which was the hunted — or who won the fight — but these paleo-nerds voted 60-40 in favor of Deinosuchus, who almost certainly had a more powerful bite.

In the category of “Your Worst Nightmare,” meet Titanoboa, the enormous prehistoric snake that roamed the planet 60-58 million years ago. Imagine a boa constrictor, only 50 feet long, and weighing in at 2.5 tons. Honestly, the T. rex could probably take this one easily, outweighing its opponent by two or three times. The Titanoboa kills by constriction, and would have to get itself wrapped around the mighty dinosaur, while avoiding its jaws, to have a hope in hell. But still, given a choice between meeting one or the other alone in the woods, would anyone honestly pick the snake?

The megalodon was a shark of insane proportions that ruled the ocean 23-2.6 million years ago, well after the extinction of the tyrannosaurs. But they had come face to face, T. rex would have look positively puny. The shark might have been more than twice as long from teeth to tail, and might have weighed ten times as much. Megalodon teeth grew more than seven inches long. Even if this battle could have happened, it couldn’t have been a fair fight — the prize would go to the beast with the home court advantage. In water, megalodon wins easily. On land, megalodon is easy prey, and a very large T. rex snack.