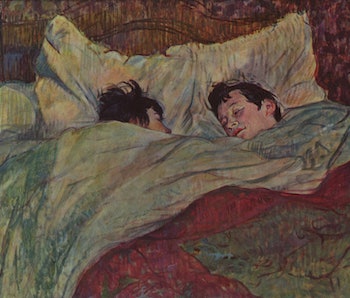 Doris Day and Zayn aside, pillow talk is hard to come by. If sex can be the shortest route between nervousness and comfort, what follows is often the quietest sort of arrival. For humans, this has always been true. Researchers have proven that post-intimacy intimacy is more of a pop-cultural meme than it is a reality for most people. The desire for post-coital conversation is, after all, biological as well as romantic and emotional. And most people aren’t built for it.

Why Harry and Sally from When Harry Met Sally . . . feel differently about how someone should act after sex essentially comes down to difference in their fictional testosterone levels and the fact that Sally is having better sex. These physiological motives were documented in the March 2016 edition of the Journal of Social and Personal Relationships by researchers who found people with high testosterone levels were least likely to want to participate in post-sex communication. This was even more true if they failed to climax.

For the study, the researchers recruited 253 participants ranging in age from 18 to 45 years old from two large university campuses. The group was predominantly straight (five identified as bisexual), slightly over three fourths female, and 97 percent unmarried. Some 70 percent of that last group were in a committed relationship while 30 percent were playing the field.

The researchers told the participants that any “below the belt” activity counted for the study — meaning penile-vaginal intercourse, oral sex, anal sex, or hand stimulation. If participants met that criteria, they were told to go to the laboratory and provide saliva samples which would be frozen, stored for three months, then tested for testosterone. The subjects were also asked to keep track of their sexual activity via an online diary, noting if they had participated in pillow talk. If they did have pillow talk, they were asked to assess the levels of how much they disclosed, how much they said, the importance of what was said, and whether the conversation was positive or negative.

After analysis, the researchers found conclusive evidence of a relationship between testosterone levels, orgasm, and a desire for pillow talk.

When it came to testosterone levels, they found that increased levels of the hormone caused people to think that there wasn’t much personal benefit to disclose how they felt post-coitus. These individuals also assessed a high risk to sharing how they felt — while high testosterone levels have previously been associated with risk-taking behavior, that is usually correlated to how someone acts in economic or competitive tasks, not when it comes to personal relationships.

“Self-disclosing private information is a different kind of risk — it is a social risk because it can make people emotionally vulnerable and potentially lead to personal and social rejection,” the researchers wrote. “Even though people with higher T levels may be more likely to take risks in other contexts, in terms of intimate relationships, it could leave them feeling vulnerable and intimately close.”

Conversely, individuals with lower testosterone levels were more likely to want to engage in and enjoy pillow talk. The researchers explain that these individuals enjoyed using this time as a way to express nurturance to their partners and disclose the positive things they felt about them. This was men and women — to refresh, yes women do have testosterone but typically at lower levels than men — and in line with what has previously been studied about testosterone. Lower testosterone levels are typically connected to more social and less dominant behavior.

Testosterone is also thought to suppress the effects of the hormone oxytocin, which facilitates positive feelings and connection between sexual partners. So to the researchers it makes sense that people with higher levels of testosterone disclose less positive feelings to their partners, because they’re not getting the “warm, positive effects” of oxytocin.

Is it important to have pillow talk instead up firing up Netflix? It is if you’re looking to bond and have a deeper relationship with your partner. It also means that you’re being more intuitive with your relationship. A 2014 study found that women who orgasmed had a heightened perceptual ability that allowed them to see that disclosing their feelings would help achieve a “desired outcome” — building a closer relationship.

“Post sex communication may therefore serve an important role in not only sustaining a satisfying sexual relationship between partners,” writes the researchers of this 2016 study, “but may also contribute to more general feelings of relationship satisfaction and closeness.”

So next time your partner wants to snuggle in and chat, let them. And if they don’t want to, at least you know that you have science to blame.