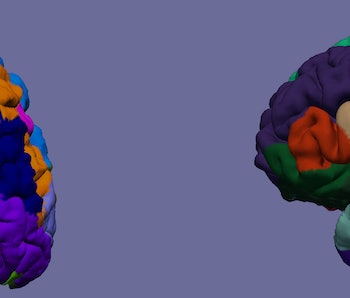 A wise Shakespeare mug once said that “love is merely madness” and when you’re in the throws of it, that certainly seems to be so. Like Dimetapp, love tastes strange, is intoxicating, and can induce disorientation. The other side effect, of course, is neediness. People in love are desperate to know if the stars have aligned to make their loves love them back. There are more than a few pieces online about how to make an educated guess about your beloved’s intentions, but for serious answers, it’s best to ask a doctor for some suggestions and access to equipment.

Here’s what you don’t learn at middle school dances: If you need to know if someone loves you, an MRI scanner and some electrode sensors will clear things up. After all, love is not so strange that science can’t track it in our brain. Forget about stressing about if they don’t text you back: It’s literally what’s happening on the inside that matters.

Love is thought to happen in three stages: lust, attraction, and attachment. At each of these different points different organic chemicals and hormones are released in the body — testosterone and oestrogen drive the lust, dopamine in honeymoon phase; oxytocin and vasopressin when the real I want to be with you forever feelings come around. The Luther Vandross behind the curtain is your brain, causing your sweaty palms and trembling voice.

Dr. Lucy Brown, a neuroscientist and clinical professor at the Einstein College of Medicine, is considered a pioneer in the neuroscience of romantic love. One of the ways she studies how love affects the brain is through functional magnetic resonance imaging, or fMRI. A fMRI measures brain activity by looking at blood flow in the brain (much like weight lifting increases blood flow to your biceps, the flow of blood increases to the areas of the brain that are active). When people experience love, their sympathetic nervous system is reacting — the same part of the brain that controls the fight or flight response.

“If you think that someone might be really attracted to you, what’s going on in their brain is an activation of part of the brain called the ventral tegmental area, which is part of our reward and drive system,” says Brown to Inverse. “It’s the part of the brain that is active when people are drinking water after being really thirsty, or eating chocolate when they’re a chocoholic.”

“It’s rewarding this system if they’re attracted to you — they are going to begin to seek you out because they have this drive to be close to you.”

Brown’s work demonstrates that brain activation definitely differs even when someone is looking a picture of someone they love versus someone they feel neutral about. And the brain reacts differently when you think that movie star is hot instead of I actually want to be with this person: When you’re in love, the right ventral tegmental area of the brain stem is activated. If you just find someone handsome or beautiful, it’s the left.

Brown explains the difference comes down to the idea of wanting versus liking.

“When you want something and really need it, okay, that means you organize your life around it — you’re in love,” she explains. “But when you find something beautiful, like there’s something in a museum you find beautiful, you’re going to want to go there and you like it, but you’re not going to go there everyday.”

On the quest to see if someone is attracted to you, you could do well to measure their skin conductance and heart rate as well. Professors Melanie Shoup-Knox and Nathan Pipitone had an idea from previous studies that men pay more attention to women who are at their monthly high points of fertility, but the biological underpinning that wasn’t clear. So they studied the autonomic nervous system of both men and women listening to the voices of natural cycling women — not ladies on hormonal birth control — while monitoring heart rate and measuring their skin temperature. They put electrodes on each arm of the subject, and then one on the ankle. The changes they saw were almost immediate.

“We found out that there’s a sympathetic nervous system change that causes change in the electrical activity of the skin and changes in the heart rate when people hear this voice,” says Shoup-Knox to Inverse. “It happens to be that the voice is a peak ovulation amongst these women.”

While studies have consistently demonstrated that men are more compelled towards women who are at peak fertility, what Shoup-Knox and Piptone’s work demonstrates as that this heightened state of arousal causes a physiological change. Interestingly enough, the voice of fertile woman affected heterosexual women’s nervous system as well — perhaps, Shoup-Knox postulates, because women need to be aware of who their mates are paying attention to.

If you don’t have a doctor at your disposal who can whisk your beau away for a love-examination, you’ll have to do make do with outwardly physical signs. Brown says a simple enough way to tell if someone is into you is if they are looking at you a lot — going back to the idea of the brain’s reward system that is very much urging them to be a bit of a creep. Their sympathetic nervous system is also what lets you witness the sweaty palms, trembling voice or hands, and momentary eye pupil dilation or a fight or flight surge into romance. But perhaps the most surefire way to see if someone loves you, other than scanning their brain? Get a little ballsy.

“If you want to know if someone’s in love with you and you’re close enough to them to ask this question, the question to ask is, ‘What percentage of the day would you say you think about me?’” says Brown. “You want the answer to be something like ‘I cant stop thinking about you!’ or ‘80 percent of the day.’… That’s the way to know if someone is really into you.”

That or the machine.