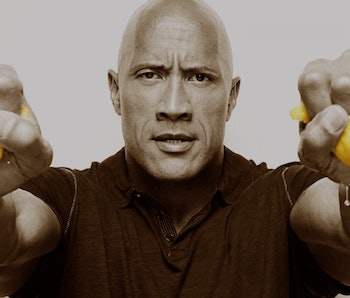 On June 17, Dwayne “The Rock” Johnson will team up with Kevin Hart and We’re the Millers director Rawson Marshall Thurber for Central Intelligence, an action comedy about … it doesn’t really require explanation, honestly. The movie probably had you mostly hooked at “starring The Rock”, right? Moviegoers have long known the actor was enormously fun to watch onscreen, and after of a string of number one box-office hits like last May’s disaster flick San Andreas, it seems as though studio execs have finally gotten the message, too.

Over the next five years, studios will be falling all over themselves to get a Dwayne Johnson film out the door. Several deals have already been inked, and even more are in the works. With all that content, can every one of those movies actually be good?

Honestly, probably not. But, there’s still reason to get excited about the potential in nearly every title The Rock has planned between now and 2021.

On November 23, the Rock will make his mark on the Disney Universe as Maui, a demigod who’s playing companion to the newest Disney princess, Moana. The film is coming out of Disney Animation Studios (not Pixar), and it’s being directed by the same guys who did Aladdin and The Little Mermaid. If the plot of a young woman embarking on a journey to save her family doesn’t have you excited, then the film’s music might just turn your head. Not only is the film being orchestrated and soundtracked by Hamilton writer Lin-Manuel Miranda, but they’re going to make Dwayne Johnson rap, so …

Excitement Level: If you like new Disney princesses, this might be the best new film in years. And yeah, I’m including the one with the snowman in it.

Of course you should be excited about next April’s Fast 8. Even if you’re not a fan of the world’s most popular action franchise, the series’ next entry is something to pay attention to. This time around, they’re really swinging from the fences, adding a slew of Oscar talent to the already powerful cast. Charlize Theron is joining the fun as the film’s big bad, while Straight Outta Compton’s F. Gary Gray is taking over as the helmer. Expect the testosterone-laden soap opera begun several films ago to continue in the eighth installment, which is being written by the same guy who’s had the job since the fourth film in the franchise.

Excitement Level: If you like talented people behaving like swaggering badasses, then we dont need to sell you on this one.

The Rock is working overtime to sell Baywatch, next May’s comedy reboot of TV’s most popular show about pretty people running slowly. That said, its on shaky ground, coming from Jake Kasdan (whose last theatrical outing was 2013’s Identity Thief. The Rock has assembled a pretty young cast to equal the original series, but the film’s comedy chops remain a mystery.

Excitement Level: Depends on your tolerance for slow motion and your need to see The Rock take his shirt off.

Johnson’s loyalty to this long running (and much lambasted) family series is only surprising until you discover that Journey to the Center of the Earth raked in $242 million and it’s sequel scored $335 million. At any rate, two more films are planned in the series, including one set for next June called, Journey 3: From the Earth to the Moon. Guess what that one’s about? Directed by San Andreas’ Brad Peyton, this family film will likely be easy to miss unless you have kids.

Excitement Level: To be viewed only in the event that you need to subdue a child on a really hot day.

Just like Spider-Man it seems there’s never to quick of a turnaround when it comes to rebooting Jumanji. Did this need to happen? Hell no. But next July, filmgoers are getting one, whether they want it or not. It’s far from the most inspired idea in Hollywood, however, considering that the source material is a children’s book more renowned for its art style than its clever plot, well reserve judgement until we see The Rock punching a giraffe in the face.

Assuming you haven’t totally given up on films based on DC Comics, then Shazam! might be tons of “bad ass fun”. The Rock has been attached to the project forever, so you know he’s passionate about the project, but the added twist that he’ll be playing the film’s antagonist, Black Adam, is even more enticing. The hero rivals Superman for sheer power with added fun of him being an actually interesting character.

Excitement Level: Tentative. The premise is intriguing, but the DCEU can has a way of making any promising idea turn into a cacophony of CGI explosions.

We don’t know anything about the reportedly last two installments in the Fast and Furious series except that theyre the last two. That said, there’s a good bet The Rock will be going along for the fun, taking on his role as straight-laced Hobbs. It may not be a starring role, but his contribution to the proceedings is always welcome.

Excitement Level: If you’ve been with the series so far, there’s no reason to abandon it now, right?

On May 30, it was confirmed that The Rock would be stepping into the shoes of Doc Savage, “the world’s first superhero”. Here’s even better news: the film is being written and directed by Shane Black, the man behind Iron Man 3 and Kiss Kiss Bang Bang. Black’s wry humor seems a perfect match for The Rock’s lovable bravado.

Excitement Level: There’s still a while before this one is out (Black has to do a prequel to Predator first), but it’s never too early to get excited about such a promising idea.

Before Pirates of the Carribbean, “It’s a film based on a ride” was enough to guarantee total schlock. However, taking one of Disney’s classic theme park rides, setting it in the 1950’s (a la The African Queen), and tossing Dwayne Johnson into the middle of the whole thing actually seems like a solid idea.

Excitement Level: With a long development cycle left to go, this one has some actual potential. It’s not like the story will be worse than the source material.

The Rock remakes the film The Rock wants to remake. Coming off San Andreas, the actor asked Fox to remake one of his favorite films of all time, casting him as Jack Burton, the role made famous by Kurt Russell (who better have a damn cameo). If you’re not familiar with the original kitschy masterpiece, then this all might sound like good fun.

Excitement Level: Does your love for Dwayne Johnson outweigh your aggravation that they’re stomping all over a classic?

Universal Pictures is doing their best to get in on the cinematic universe game and they’re going for the books of Robert Ludlum. What’s more, they’re not putting their eggs in the Bourne basket; they’re kicking things off with The Jansen Directive, casting The Rock as a character the actor describes as, “classic Robert Ludlum.”

Excitement Level: If you were getting bored of watching Matt Damon do his super spy thing, this may be the perfect antidote.

No one actually expected San Andreas to hit, but it did, so a sequel was pretty much inevitable. There’s no word on what the sequel will entail, but the current rumor is that the film is expected to go global by focusing on the so-called ‘Ring of Fire’”. More shaking, more running, more destruction. Sign me up.

Another film from Johnson and the San Andreas team, Rampage is based on the 1980s video game that that revolves around giant monsters who destroy cities. The Rock is expected to be the man tapped to stop them. Honestly, it’s hard not to be excited about this film provided its effects budget is large enough.

Excitement Level: The Rock vs. big, hulking monsters. Who’s not on board?

Given the number of repeat collaborations in his career, The Rock must be delightful to work with. Skyscraper is set to be written and directed by Central Intelligence helmer Rawson Marshall Thurber. While the plot is being kept a firm secret, it’s not too difficult to extrapolate some elements of the plot judging from The Rock’s involvement, the genre (it’s an action film), and the film’s title.

Excitement Level: Provided it can distinguish itself from that other skyscraper-set action movie, this should be one to keep an eye on.

It’s currently unclear what exactly Alpha Squad Seven is, but according to The Hollywood Reporter, the idea was sold over a dinner “with only a one-line idea.” That may sound preposterous, but these days, “The Rock in space #GuardiansoftheGalaxyRipOff” would probably be enough to get any studio exec’s mouth watering.