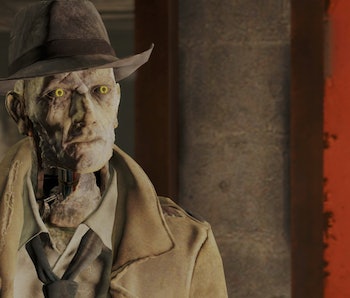 Fallout, as a franchise, has always been a series about telling stories from the post-apocalyptic world it takes place in. These stories are often filled with many emotions relating to the struggles of living in a post-apocalyptic world from various perspectives. Sometimes, these stories are about the survival of the human race, sometimes they’re about the brutality of humanity when pushed to the brink, and more recently – about what it means to be a human being.

It’s no secret that synthetic human beings are a massive part of Fallout 4’s story and focus. Called synths by those living in the Commonwealth, these are androids created by an advanced scientific organization known as the Institute. Synths are cybernetic organisms designed to resemble humans and house advanced automated intelligence, but are often discriminated against due to the Institute conspiracy that surrounds them.

In the Fallout franchise, synths are separated into three different generations. Generation 1 synths are entirely mechanical humanoids who are skeletal in appearance and thus a rough representation of a living human being. Like Generation 1, Generation 2 synths are also mechanical, but have more advanced frames covered in plastic skin panels. While they certainly don’t appear human up close, from a distance they could be easily mistaken as a normal human being. Generation 3 synths are most advanced and developed of the whole stock. Each has a bio-mechanical body capable of bleeding, respiration, digestion and exhaustion along with the capacity to process emotions and sensations. These Generation 3 synthetics are completely identical to human beings outside of a chip placed within them and thus are the main focus of Fallout 4’s story.

In order for the Institute to fully develop the Generation 3 synths they needed to obtain a pre-war test subject to experiment with. By obtaining the DNA of said subject they could finish their work on the third generation and send them out into the world. After finding out that pre-war humans remained in cryostasis, the Institute send out one of their mercenaries Conrad Kellogg to retrieve a pre-war human for their experiments – which takes place as your character’s son is taken from you at the beginning of the game in Fallout 4. The rest, as players of the game are well aware, is history.

Throughout the entirely of Fallout 4 players encounter a wide variety of synths across the wasteland as they complete the game. These synths are often hostile if affiliated with the Institute and are essentially the bogyman of the Commonwealth area, but can also be found as autonomous beings who just want to live out their lives like normal. See, unlike normal humans, synths can have their memory wiped numerous times – and if theyve managed to escape from the Institute, they are property the organization is trying to get back.

In many cases these Generation 3 synths just want to go out and live their lives free of the Institutes control. During the game players encounter many such synths alongside others who are now unwanted projects, such as the companion detective Nick Valentine. Considered a unique synth, Nick was one of two prototypes that bridged the gap between Generation 2 and Generation 3 synths who was imprinted with the memories and personality of a pre-war detective who volunteered for the project. Up until recently though, we thought he was the only unique synth – and we were wrong.

In the latest DLC for Fallout 4, Far Harbor, we come across Nick Valentine’s brother DiMA. Unlike his brother, DiMA was allowed to freely develop his own personality through experience until the two of them escaped the Institute together. While DiMA remained a free thinker however, Nick was disoriented and attacked him due to his personality imprint which caused the two to part ways. After being separated from his brother DiMA fled to the island of Far Harbor to hide from the Institute but without a programmed objective for his existence he merely sat – until he came to the conclusion that he could define his own objective in life. That decision resulted in him founding a haven for synths which is now known as Acadia.

Throughout Fallout 4 many players worked to try and understand the entire theme behind synth stories like Nick and DiMA’s but ultimately it’s a difficult thing to comprehend; to feel as a player who merely walked out of Vault 111 in search of his or her son. But in Far Harbor Bethesda flipped the entire concept in a way that really makes you question your existence (as a character within the game, of course).

Upon meeting DiMA for the first time he will pose a question to the player, suspecting that there is another reason for your arrival: he’ll ask you if you’re a synth.

As this conversation plays out DiMA will ask you to look for the typical signs synths find in their lives that make them question their existence including holes in your memory, feelings of unexplained isolation and unexplained dreams. He’s asking you to question your humanity, and the result for me was a series of mixed emotions. He asked me about my first memory, which as a player was the beginning of the game – where I took care of my son, prepared for my day and ran into Vault 111. DiMA was right, I didn’t have a memory of my characters first kiss, his first best friend or his experiences in the military. So was it truly possible, was it possible that my character was a synth?

It honestly makes a lot of sense based on the facts surrounding the Institute and their progress surrounding Generation 3 synths. The player character entered Vault 111 around 2077 when the Great War first began and was cryogenically frozen as part of the Vault’s experiment. Based on what we know the first Generation 3 synths were created around 2227, which is when Kellog comes into Vault 111 with scientists from the Institute and kidnaps your son for his DNA to finish their development. Once your son is captured though, you’re knocked out once again and we don’t know what happens until 2287 when you escape the Vault.

The running theory here is that during those 60 years after Shaun was kidnapped by the Institute they came back into Vault 111 and took your human body, replacing you with a Generation 3 synth imprinted with your memories as some form of test. If true, it means that your character would be one of the first Generation 3 synths who successfully was imprinted and carried out the life of their original being as if nothing had every happened – which in the end is the ultimate goal of the Institute.

Based on the choices you can make in the game this realization really hits home, especially considering that you can become a member of factions like the Brotherhood of Steel and the Railroad who have a severe hatred of everything the Institute stands for. Imagine how successful the Institute would consider themselves if one of their Generation 3 synths actually fought against them to rescue his or her son as a Paladin of the Brotherhood of Steel.

Even if you ended up siding with the Institute in Fallout 4 though, the concept of your character being a synth remains with purpose. By going to find your son and taking his place as the leader of the Institute, it proves that the process has gone full-circle and a Generation 3 synth now leads the Institute in your son’s place. In a way true humanity was replaced by synth creations, which is one of the goals behind the Institute in the first place.

No matter what you believe to be true about your character, Bethesda really hit home with this narrative decision by helping to explain the struggle of being a synthetic individual in the world of Fallout 4. It’s worth pointing out that there are plenty of reasons working against the idea of your character being a synth too – such as when Father discusses his personal choice to wake you from cryostasis at the beginning of the game. But either way, it’s a great introduction for a new crazy way to view Fallout 4 we didn’t see coming.