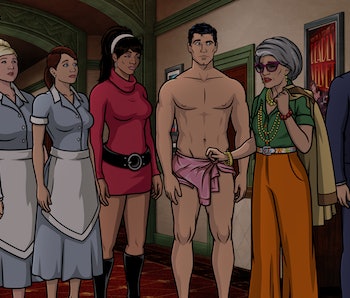 The “Hollywood” that the Archer gang has ostensibly taken on in its seventh season can be summed up in a single glamorous, though slightly wrinkled, face: Veronica Deane. Over the past eight episodes, the aging star has played many roles: Object of Sterling’s Oedipal affections, Lana’s rival, well-moneyed client to the Figgis Agency, and, now, in the season’s penultimate episode, murder suspect. As the season prepares to unravel the mystery set up in the pilot — how will Sterling make it out of the pool alive? — all eyes are on Deane.

Deane’s, however, are fixated on Sterling: In “Deadly Velvet, Part 1,” the Figgis Agency has been hired by the high-powered director Ellis Crane — Deane’s ex and Lana’s new psuedo-beau — to keep the set of his new movie safe after a rash of freak accidents. Sterling, thrilled to pose as Deane’s new bodyguard, seems to win her affections after rescuing her from a clearly deliberate runaway forklift. As his dreams of bedding the sultry star come to sticky fruition, Cyril’s sleuthing uncovers some shady business deals with the help of an especially salty Mallory: Crane’s film, insured and re-insured by a string of shell companies, stands to make more profit by failing than it does by ever being released. At the end of the paper trail is a company suspiciously named “Sandhill Crane,” leading the crew to hunt down Ellis himself — but by the time they find him, it’s too late.

The romantic intrigues set up over the course of the season propel the episode to its dramatic close: An explosive fight between Lana and a post-coital Sterling, too fiery to be funny, distracts the crew from their mission; meanwhile, the lovelorn lawyer Shapiro, desperate for his clients affection, enlists Pam and Cheryl to prevent Sterling and Deane from finally getting it on. Amid the emotional clusterfuck, nobody stops to think: Where is Deane? Making a point to disentangle herself from Sterling’s embrace right before 3 pm, she’s suspiciously absent when the entire crew discovers Ellis alone in a darkened room, pinned against a bloody wall by a bullet through his head.

Though it’s certainly a nice change to have a proper mystery on the crew’s hands, the complicated setup for the season’s grand finale, unfortunately, doesn’t leave much room for laughs. The Lana-Sterling-Veronica love triangle has become especially tedious, and Shapiro’s mooning over Deane is too pathetic to be funny. This episode, Malory — but would the real Malory eat a grape? decked out in what could well be garish D&G as an undercover executive producer, is hilariously salty, rolling her eyes at a self-congratulating Cyril (“Get over yourself, Rain Man!”) and revealing that she literally does not know that Pam is, in fact, a female (“When was the last time you even saw your penis?”).

Notably missing from the action is Krieger, who Mallory dismisses at the beginning of the episode with the directive to “just sort of skulk around.” After the big reveal of his robot clone army last week, his absence and response — “Oh I will” — is especially unnerving, setting the season up for a deliciously weird end.