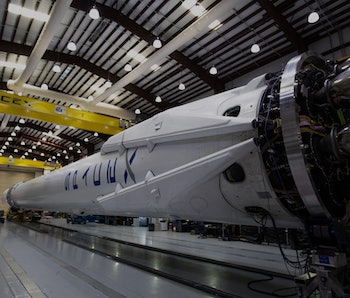 Hours after the intended liftoff for SpaceX’s scheduled Falcon 9 launch today, the company announced that it was postponing the day’s events due to minor concerns. Today’s mission was intended to launch at 5:40 p.m. Eastern from Cape Canaveral, Florida. The objective was to launch a Thaicom 8 communications satellite into orbit via the increasingly standard Falcon 9 rocket. After delivering the satellite to orbit, the Falcon 9 was to face another challenging landing on the drone ship, Of Course I Still Love You. Unfortunately, at about 7 p.m. EST, SpaceX took to Twitter to explain the issue.

Stating that the launch was postponed to “no earlier than Friday” at approximately 5:40 p.m. EST, the tweet was followed by a response from Elon Musk, who went into slightly more detail about the delay. Before the announcement, today’s mission had a 93 percent chance of success, despite doubts about the Falcon 9’s high velocity re-entry and landing.

After months of failures and minor hiccups, SpaceX has been enjoying something of a landing streak with their Falcon 9 rockets; the company was aiming for a third victory today. As for the Thaicom 8 satellite, its eventual launch will make it the fifth operational satellite for Thaicom. According to the original mission briefing, the satellite “will strengthen Thaicom’s broadcast platform at 78.5 degrees east longitude – providing South Asia and Southeast Asia with broadcast and data services.” The release also went into detail about how the mission was supposed to work during delivery:

The satellite will be delivered to a supersynchronous transfer orbit that will later be reduced by the satellite to an approximately 35,800 kilometers circular geostationary orbit.

The precautions make sense in context with safety measures. It costs $60 million to make the Falcon 9 alone, and $200,000 to fuel the rocket — so it’s an understandable and innovative move.

More like this
Science
6.27.2022 8:45 PM
NASA found the crash site of the rocket booster that hit the Moon in March
By Kiona Smith
Innovation
3 hours ago
Are self-driving cars safe? The tipping point rests on a psychological illusion
By Jean-François Bonnefon and The Reader
Innovation
7.1.2022 10:00 AM
Robots are ready to get touchy-feely
By Sarah Wells
Related Tags
Share: