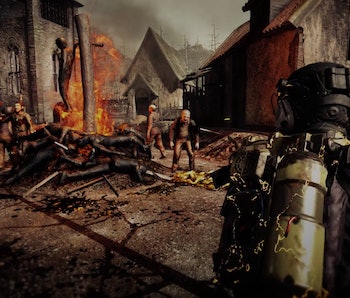 No one knows how to reuse assets better than Resident Evil. Since the series’ inception in 1998, we’ve returned to a lot of the same locations multiple times. There have been entries that retread locations from different narrative angles, on-rails shooters that give you the experience of a Resident Evil game if it allowed you to actually have bullets, co-op online adventures, arcade-style battle arenas, straightforward HD remakes, and in June we get yet another drop in the bucket with a slight twist: Capcom is bringing Rainbow Six style team vs. team deathmatches to a greatest hits list of RE locations/maps via their newest game: Umbrella Corps.

Indeed, Capcom has reanimated the corpse of this IP more times than — something something zombie metaphor. You get it. We all get it.

Working for TriCell/Umbrella, you and your team are sent in to take out… other corporate espionage teams from your same… company? Well, that makes as much sense as anything else in the Biohazard-verse. Umbrella Corps has you teaming up in 3 on 3 brutally specific military breakdowns where you’ll crawl through the sewers and over rooftops to shoot some dudes in silly masks. More importantly, the zombies will completely ignore you until you take a significant amount of damage, ruining the zombie-repellent device on your back.

So where will we be revisiting in this latest outing?

Back in RE:5 Chris Redfield arrives in the fictional African city Kijuju to meet Sheva Alomar, where he witnesses the natives hitting a sack, with a struggling being inside, with wooden sticks. After meeting up with Sheva, the population gets hostile towards them and things get bad fast.

Also from RE:5 we have the Tricell base, which also doubles as the location for the game’s only single-player activity: a hoard-mode activity called the The Experiment.

From Code: Veronica we’ve got a bit of a deep cut in the Antarctica base map. This one comes with bonus monsters that hunt you down whether your anti-zombie device is functioning or not.

The Village from the iconic opening of RE:4 is packed with Ganados, monsters, and a lot of fire.

There’s also some secret labs in the basement of Umbrella that, honestly, could come from any game in the series.

Does it excite you to think about dying in the same places where you’ve already died many times over two decades of this franchise? Then the aforementioned RPD Police Station and Street of Raccoon City from RE:2 are going to make your day. Although I wish that instead of updating art assets, we could see as cool an environmental reinvention as The Evil Within gave the mansion from the original Resident Evil.

That said, if you thought they were upgrading these locations to HD just for Umbrella Corps, you’d be wrong. All three of these original games got an upgrade for a soon to be released next gen console package. Check it out here:

More like this
Gaming
5.2.2022 1:00 PM
Where to find all six offerings in the Genshin Impact Millennial Mountains quest
By Sean Martin
Gaming
5.4.2022 5:08 PM
How to find and wield Fortnite’s elusive lightsabers
By Joseph Yaden
Gaming
23 hours ago
2022 game releases: The 14 biggest games launching this summer and fall
By Bryan Lawver
Related Tags
Share: