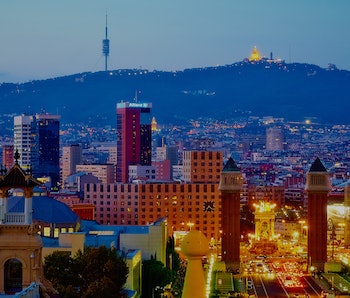 It is a truth universally acknowledged that all major cities are in search of a way to mitigate traffic. This is why Barcelona’s plan to implement “superblocks” is gaining traction with city planners around the world. Designed to reduce traffic by 21 percent, the superblocks carve out nine square blocks of “citizen space” where motor vehicle through traffic is limited. The roughly 40-acre superblocks will be tested in five neighborhoods throughout Barcelona and serve to free up more public space for walking, biking, and other non motor vehicle activities.

The obvious question this idea raises is it how it will affect transit in the city. Barcelona’s buses will be rerouted on streets around the perimeter of superblocks, which city officials predict will help people make trips in one transfer or less and decrease the average 13-minute wait time for buses. Since most of Barcleona’s streets are one way, though, transit expert Jarrett Walker says the new bus routes create “one-way splits,” which make walking to public transport more inconvenient.

Whether or not the superblocks end up improving traffic flow in Barcelona, the idea is interesting and begs to be reimagined in cities in the United States. Where might the superblocks work, and where would they make a mess?

As one of the most crowded cities in the U.S., New York could absolutely benefit from some traffic reduction methods, but superblocks won’t be the answer. Since the island of Manhattan is so skinny and bordered by rivers on either side, there probably isn’t enough width available for these 3x3 superblocks.

If you’ve ever sat in L.A. traffic, you know that it may not even be worth trying to make it better at the risk of exacerbating it. Although most people living in L.A. have accepted that half their lives will be spent sitting in traffic on the 405, the enormous sprawl of the city definitely creates enough room for superblocks. Since cars crowd the city of L.A., superblocks could provide some necessary, free-of-cars areas.

With one side of Chicago bordered by Lake Michigan, it’s tough to say what superblocks would look like in the windy city. There is, however, plenty of land extending out to the west, which may make for some convenient superblocks further away from its downtown area.

San Francisco is surrounded by water in a similar way that Manhattan is, but the California city is much wider, clocking in at seven miles wide, as opposed to Manhattan’s two-mile width. San Francisco’s trolleybus system poses a problem though as it would take a lot of extra work to reroute the cables that the trolleys travel along if buses needed to be rerouted. Let’s go ahead and say that San Francisco is going to pass on superblocks.

Houston is essentially landlocked on all sides, which makes the possibility of superblocks in the southern town a bit more promising than other locations. As the fourth most populous city in the United States, Houston could surely benefit from some traffic reduction, and its 627 square mile area could be spacious enough to accommodate some more areas reserved for pedestrians and bikers.