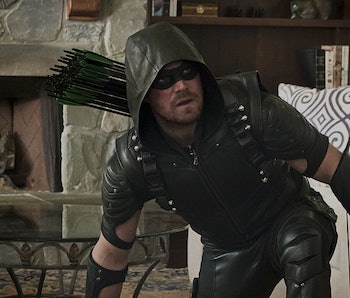 Neal McDonough chews up every scene he’s been in this season. “Lost in the Flood,” the penultimate installment before the Arrow Season 4 finale, was saved because of McDonough’s signature hammy performance as Damien Darhk. Otherwise, Arrow is doomed to a flood of boredom and stupidity.

After the loss of ten thousand in Havenrock, the dark energy has given Damien Darhk seriously powerful magic making him nigh unstoppable, so much that even Superman would be screwed. But instead of a showdown — which is obviously being saved for the finale — Arrow refocuses into a rescue plot, with Oliver (Stephen Amell) and Diggle (David Ramsey) infiltrating Darhk’s “ark,” officially Tevat Noah unless I haven’t been paying attention because Arrow is really hard to be engaged with nowadays, to save Thea (Willa Holland). But lurking in the shadows is Anarky (Alexander Calvert) and his vendetta against Darhk, and quickly becomes the episode’s plot villain for no real reason.

With the help of Felicity (Emily Bett Rickards), her super-villain daddy the Calculator (Tom Amandes), and Curtis (Echo Kellum), and inadvertently Anarky, Tevat Noah is destroyed with Darhk’s wife Ruve (Janet Kidder) a casualty. Darhk is a man with nothing left, so will now burn the world with him.

Let’s put aside the dumbest hacking scene I’ve ever witnessed on television, or the droning drama of the Smoak family, or even Green Arrow’s existence bringing more death and destruction upon Star City than when he arrived four years ago. For all its faults, Arrow can still be a stupid fun show even when stupid fun isn’t what we ask for in TV anymore. Oliver and Diggle’s escape against Hive (FYI there was also a Hive over at Marvel’s Agents of S.H.I.E.L.D., so I’ve had a ball doing these recaps) was exciting and well choreographed, if also poorly conceived given Arrow and Spartan put civilians at risk. How do you escape armed soldiers? Run into open streets, of course.

Neal McDonough anchors any reason to stay tuned into Arrow and “Lost in the Flood” is an example of this. Every scene McDonough is in is stolen by his silvered mug, his eyes that communicate delight and menace without visible change. It was a bummer Arrow would keep a magical antagonist for another season (Matt Nable’s excellent Ra’s Al Ghul dominated last season), and only McDonough has saved the season from being an outright disaster.

Doesn’t it suck that a nuclear holocaust occurred in the Arrowverse and it’s not treated as a cultural watershed moment? Doesn’t it suck Felicity doesn’t feel guilty about failing to divert it too? Star City has become insular, even in a world with The Flash. The point of a cinematic universe (TV or otherwise) is to feel like the world spans farther than what fits in a camera’s frame. But save for a few news reports on background TV screens, a nuclear explosion is equivalent to another unfortunate mishap with the same concern as a missing airplane.

Candlelit vigils? A message from the President? None of that is in Arrow. Is there anyone still in Star City to care that the Glades have been leveled for like the dozenth time in the last four years? Who knows. Arrow is getting too dumb to care.