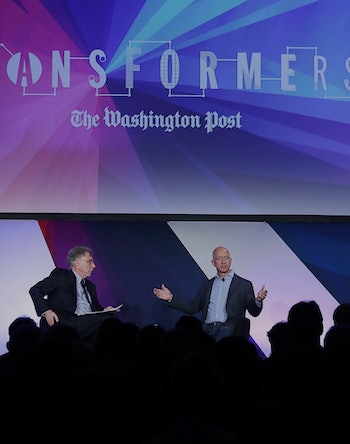 I entered the Washington Post’s “Transformers” future hype-machine a jaded skeptic. After a mere two hours, I’d myself transformed into a focused, intrigued child. I was in a room full of history makers: many of the world’s most important movers and shakers were gathered inside the brand-new Washington Post Live event space, replete with refreshments galore and all-around swank.

I was within reach of NASA Administrator Charles Bolden, DARPA Director Arati Prabhakar, literal cyborg Neil Harbisson, The Martian author Andy Weir, and many, many more men and women with appreciable, estimable modifiers. I spoke with newly appointed MacArthur genius Sheila Nirenberg, a woman who’s literally restoring sight to the blind. I was doing it: I was acquiring a positive outlook.

Then, I stepped out for lunch. Once again out in the real world, the sensation dissipated. The future, despite assurances to the contrary, had not yet graced us with its presence. I stood at a street corner and awaited an LED sign’s permission to once again walk. I watched a homeless woman, sitting on a bench across the street in Franklin Square, flip through an empty legal pad, enrapt. I took in our nation’s capital’s cacophony — gas engines roaring, stressed people shouting, emergency sirens erupting, hungry pigeons kerfuffling — and I felt the Kool-Aid’s effects waft away into the ether.

And let me tell you: there was Kool-Aid aplenty. “Transformers” attendees were treated to free and never-ending coffee, soda, Naked Juices (!), various fruit, pastries, muffins, yogurt parfaits; Washington Posts, hot off the presses, awaited you at every turn. There were enormous, wall-embedded flatscreen TVs broadcasting live what was happening just inside the floor’s main theater. There were Samsung Gear VR headsets to try out and smartphone charging stations. There were servers and ushers to facilitate your stay. There were a couple hundred beautiful people adorned in business attire. There was even a janitor cleaning the spotless bathroom who kept his mouth shut when you asked him what he thought of all this hubbub. All told, there was virtually nothing about which one could complain.

The event, “Transformers,” with all its featured speakers and accoutrements, was an argument. Owner Jeff Bezos, Publisher Fred Ryan, and the Washington Post writ-large would very much like you to believe that they, together, own the future’s nexus.

It’s the Bezos approach, mapped onto 21st-century journalism. “Achieving or maintaining the status quo will never be sufficient,” Ryan, at the welcoming address, said. They have the money and the visibility to attract and retain these powerful minds, and they offer unto you the illusion that it’s all for your benefit and entertainment. How’s the future going to look, taste, feel? The Washington Post will give you the answers.

“We are really at a tipping point: the progress is so exciting,” Bezos, in his closing interview, said.

Icarus, in some earthen grave, was smiling.

Once inside the theater, I holed up as far out of sight and notice as possible and awaited enlightenment. Brilliant people told the crowd about harvesting bioengineered pig organs for human implantation, about how technology would allow our species to at last outpace evolution and augment our every sense, about how the rich will turn more and more to philanthropy, and about — lest you’d forgotten — space. Mars. Martine Rothblatt, the United Therapeutics Corporation’s chairman, expressed, with gratitude, her belief that “we’re all alive at the best of all possible times.” There were panels on DNA, self-driving cars, the almighty internet, and artificial intelligence.

As for the audience, it was not altogether outside of what you’d expect for a high-profile event in Washington, D.C. Andy Weir, in an attempt to make a point about the eventual, gradual decrease in price of space tourism, asked the audience: “Who here could spend $10k to live in a space hotel for a week?” Half the people in the room raised their hands.

About that many people were active, absorbed listeners (though a significant portion remained absorbed in their smartphones.) An impressive number, myself included, took notes with pens on outmoded notepads. As the day wore on, more and more attendees materialized.

Out in the lobby, I milled about. I wished there was an app to recognize famous people. While someone inside the theater spoke about the merits and future of DNA sequencing, I spotted Sheila Nirenberg. She had just attempted — with remarkable success, I might add — to distill her project’s process down for a semi-attentive audience. That project, again, was to give sight back to the blind.

So as to better explain this enormous undertaking, she had used a slideshow. Either the person running or the technology powering the slideshow was not up to snuff. Throughout the day, the technology blunders continued to pile up. The wifi was unreliable; the microphones fed back. The irony was palpable: here we all were at what was meant to be the future’s hub, and yet we remained victims of faulty technology.

Nirenberg confirmed the obvious regarding the event. “It is hype,” she said.

“We saw that with Google Glass.” Here was a technology that was meant to change the world, and it could not live up to the hype.

Riding the hype train is a necessary evil. Still, the MacArthur genius advised me, and people in general, to cut through the relentless optimism about emerging and marketed technologies. The world, she said, was more eager for the truth than it was for false hope.

And “Transformers” offered both: There was abundant false hope, but there was, too, truth. Most noticeable was the contrast between modern limitations and future longing: we’re stuck in the present, and thirst for a world that is not now. In many ways, Rothblatt’s summation was accurate: our modern world is by and large a thing of beauty, deserving great respect, admiration, and gratitude. But her comment was also paradoxical: she uttered it to a room full of people who’ve grown so accustomed by this current world’s nectar that they are now jonesing for the next delight.

And that jonesing is just what Bezos and co., with “Transformers,” are capitalizing on. The truth — as Nirenberg would prefer it to be told — is that the nectar will never be as sweet as we imagine it will taste.