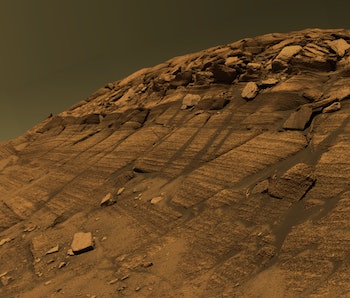 As we march ahead to put people on Mars and create permanent human settlements there, scientists are trying to better understand the prospect of bringing life to the new world.

Cassie Conley, a planetary protection officer at NASA, says, “You probably have organisms in your mouth right now that could grow on Mars.”

That’s not a crazy statement — it’s grounded in truth. At the Humans to Mars Summit 2016 today in Washington, D.C., Conley discussed exactly what kind of non-human lifeforms from Earth could survive and even thrive on Mars — and what that means for the idea of humans living on the red planet.

Moving organisms across environments is ingrained in human history. Whether by plane, train, or automobile, humans have been an unstoppable force in transporting both themselves and other species to foreign environments.

The effects haven’t been totally positive. From Swedish coastal waters being ravaged by American lobsters, to Oklahoma’s grasslands becoming replaced by a sea of juniper, invasive species are proof that giving organisms new homes can destroy natural ecologies. Those observations helped scientists and lawmakers establish the concept of “planetary protection” — the notion that we want to forbid the transfer of any lifeforms and materials to and from other celestial worlds to limit any negative effects that could arise as a consequence.

Planetary protection, Conley told her audience, is “based on data…on what we know, and what we don’t know.” It’s that latter part that’s crucial: bringing new life to Mars won’t necessarily create a negative impact — but too much is unclear to really take that chance. “It may be that there are no consequences,” she said. “But we don’t know that!”

The expense in time and resources to launch rockets acts “as a huge bottleneck” to help us control this transfer “to ensure we don’t repeat the mistakes of the past,” said Conley.

Although planetary protection laws operate by way of international treaties that are about a half-century old, there are more fluid nuances in the way NASA fulfills them. “We take precautions when we have data to suggest we should take precautions.”

For example, until the Viking missions of the 1970s, we had little understanding of what Mars looked like. Those missions show us Mars was a barren wasteland, and so the prospect of bringing bacteria or other organisms to the planet seemed benign because they probably wouldn’t survive. Scientists weren’t very concerned a loose population of microbe would create any big effects on Mars if they inadvertently settled in.

Then we discovered evidence that Mars was once teeming in oceans and lakes. We found gullies. We found liquid water. NASA’s planetary protection protocols tightened up once again.

Furthermore, although the Viking landers were decontaminated of all life, it’s only now after a few more decades of biological research that “we have discovered that there are many more Earth organisms that are capabilities that we didn’t expect,” said Conley. They can survive extreme temperatures, dry climates, a lack of resources, and much more. It’s almost certain we’ve already accidentally brought microbial life to Mars.

That’s where Conley’s “mouth” statement applies. The bacteria that helps produce cheese is often riddled in pretty robust bacteria, so anyone who recently has had a slice of pizza probably has had some bacteria crawling around the crevices of their teeth. That same bacteria has a good chance of surviving on Mars — as long as they could find protection from the harsh UV rays hitting the surface and have access to some level of water and nutrients.

What would those consequences be? Conley outlined one hypothetical scenario. There’s one type of bacteria on Earth that can produce carbonate in the presence of water — which is a mechanisms that could “repair” broken concrete. If harnessed, this could be profoundly useful for what we do here on Earth. “On the other hand, it would be really inconvenient if they got into an aquifer on Mars,” she says, since this would essentially seal off the aquifer.

It’s for these reasons NASA is taking what Conley calls a “phased approach” to Mars exploration. This involves first mapping the planet out with orbiters; then surveying the landscape with robotic rovers to better assess areas that might be particularly vulnerable to transformation via microbial life; then finally sending humans out to places where contamination by other organisms would have minimal effects on the natural ecology.

In terms of risk-benefit analysis, Conley and her colleagues at NASA believe it’s better to take fewer risks now with more precautions in order to reap more benefits of Mars exploration later. So, although you’re dying to get to Mars now, be patient! We need to take our time before we mess Mars up like we’re currently doing to Earth.