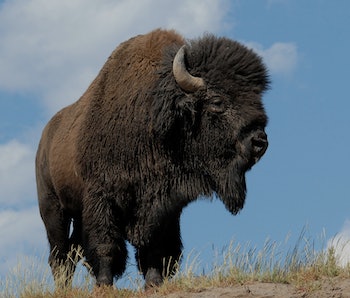 Oklahoma is known for many things — cowboys, oil and gas, a solidly Republican voting base, and bison. It might be time to add “forests of juniper” to that list. Oklahoma is where the southern High Plains begin, but that might not be true for long. Wildlife and rangeland specialists there now warn of a slow-motion ecological disaster gradually stripping Oklahoma of its grasslands. It goes by various names. Some call it the Green Glacier, others the Woody Invasion.

No matter what you call it, it’s easy to see from Interstate 40, which cuts across Oklahoma from Tulsa to Elk City along old Route 66: There’s juniper everywhere. And it’s eating up the plain. The problem affects other states as well. Arizona, Utah, and parts of the Southeast also face explosions of juniper gnawing away at historical ecosystems and filling in productive rangeland.

This isn’t your standard invasive species story, though. The two species of juniper that cause the most trouble in Oklahoma, Ashe juniper and eastern redcedar, are native plants, but for centuries they were contained by frequent fire. Dwayne Elmore, an extension and wildlife specialist at Oklahoma State University, wants to bring that fire back.

“We’ve had a long history of fire suppression that really dates back almost to settlement by Europeans,” Elmore tells Inverse. “Historically, the Great Plains were frequently burned by Native American tribes for various reasons, including hunting, warfare, aesthetics, ease of travel, etc. And when they were displaced and this land was settled by Europeans, the land ownership changed. It became blocked out, homesteaded, and most fire started to decline across the landscape.”

In the last decades of the 19th century Oklahoma drew Sooners and other homesteaders (many of them illegal squatters on Native American land) to its vast reaches of unplowed grassland in search of a better life. Along with the Texas panhandle, western Oklahoma was at the center of the early 20th century grain boom that came skidding to an apocalyptic halt in the Dust Bowl, long considered the worst ecological crisis in American history.

A series of enormous fires in those early years — including one that burned 3 million acres in Idaho and Montana — prompted a response from the Forest Service. Fire suppression was gospel from then on. The dominant M.O. was “this almost militant view of, ‘We’re going to command and control fire,’” Elmore says. “This became policy all across the United States … and we’re paying the price for that now.”

The fire dynamics are fairly straightforward. Oklahoma’s grasslands usually burned maybe once every two or three years. These frequent, low-intensity fires killed any juniper saplings that had taken root while rejuvenating the grasses. Anywhere the fire couldn’t reach – cliffs, rocky outcroppings, narrow draws – played host to juniper. Without frequent fire, the juniper spreads. Once a tree is five or six feet tall, a low-intensity grass fire won’t kill it.

The full scale of the problem isn’t known for certain, but “clearly we’re talking millions of acres,” Elmore says. “I have no reservation saying that.”

The slow creep of juniper has consequences for the entire complex ecological network of the landscape. It changes which wildlife species can use the area. It changes the pollen balance, making grass pollen less common and juniper pollen more ubiquitous. Some preliminary results indicate that juniper increases overland flow of water but decreases aquifer recharge.

Juniper infested rangeland is also less economically productive. In many cases the amount of available forage for grazing livestock goes down by a factor of 10.

“It also changes the fire,” Elmore says. “When we do have a fire, it often results in a crown fire, so its in the canopy of the trees … And we have built a lot of homes in this juniper forest matrix, so a lot of homes are at risk from these catastrophic wildfires. So while they might be infrequent, it’s much more intense.”

The same is true in Utah, says Eric Thacker, an extension specialist at Utah State University.

“If you look historically, we’ve actually increased the amount of woody vegetation on the landscape as a whole, and a lot of that is due to fire suppression activity,” Thacker said. “So we’ve put more fuel in the stove without lighting it, so to speak.”

The impact of juniper encroachment on bird species has land managers especially concerned. In Oklahoma the birds of choice are the greater and lesser prairie-chickens, which shun tall objects of all kinds. In Utah it’s the sage-grouse, which relies on extensive swaths of intact sage brush habitat — precisely the ecosystem most threatened by juniper encroachment in Utah.

“They’re similar birds in that they’re both prairie grouse. They both need large intact landscapes,” Thacker says. “What we’re finding is the old, ‘If you built it they will come.’ If you knock those trees down, the birds will come to use it.”

But getting rid of the juniper would require an upheaval in how we think about fire, thanks in large part to propaganda from decades of Forest Service campaigns that preached total fire prevention. You know, Smokey the Bear and all that jazz. But the alternatives to fire aren’t particularly effective.

Mechanical treatments — like sending in teams with chainsaws to cut the trees down, or dragging an anchor chain behind two tractors — are expensive and burn a lot of fossil fuels. And without regular fire, the juniper will just creep back.

“Looking toward the future a little bit — right now we’ve been very mechanized in our approach,” Thacker says. “We’re going to have to introduce fires into those systems. I think it’s the best and most effective way to deal with the juniper problem.”

If we don’t get our act together, we could lose out on one of our most beautiful landscapes.

“The things that we know about today, like being able to drive across and see a sunset across the prairie, or see prairie chickens dance on a booming ground … Those are things that 50 years from now might just be in a song.” Elmore says. “People might be like, ‘What are you talking about?’”