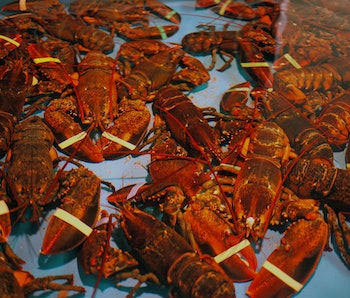 In what is surely (not) a response to Donald Trump’s xenophobic policies, the Swedish environment ministry wants all living American lobsters banned from Europe. The country is hoping that the European Union’s committee on invasive species agrees that the shellfish threatens the wellbeing of smaller European lobsters, as well as coastal ecosystems in general.

American lobsters have been discovered in the coastal waters of Sweden and Great Britain, likely because they either escaped or were purposefully released after being shipped for European seafood markets. The suspicion is that people are putting crates of non-native lobsters into crates in the ocean in an effort to keep them alive longer.

Invasive species are bad for biodiversity — when they’re introduced into a new environment, then have a tendency to disrupt the natural order of things and leave the entire ecosystem poorer and less resilient as a result. But American lobsters are particularly scary for a few reasons. For one, they are bigger than their European counterparts, which makes it likely that they would outcompete them for food and other resources. And, like the Zika virus’ recent invasion of the Americas, the lobsters could bring foreign diseases for which the local species has no immunity. Finally, because lobsters are worth more alive than dead, it’s very difficult to prevent them from spreading around the globe without shutting down a lucrative seafood market.

And there’s the rub: The consequences of a ban on live American lobsters in Europe will impact a lot more than the environment. The European Union imports $134 million in American lobsters annually. Industry folk are understandably nervous. “They’ve found 32 lobsters in seven years,” says Geoff Irvine, head of the Lobster Council of Canada. “We’re skeptical that that could be called an invasion.”

Beth Casoni, executive director of the Massachusetts Lobstermen’s Association, went a step further, saying it’s the Europeans’ own fault if they release the live lobsters into the ecosystem. “They are the ones breaking the law. We don’t buy European species and let them free,” she told the Guardian.

If the ban were to go forward, it would not only burn the American and Canadian lobster industries, it would be a boon to European lobster harvesters. A ban would also hurt European consumers, who would no longer have access to fresh American lobsters. This, more than any environmental concern, could end up being the downfall of the Swedes’ proposal.