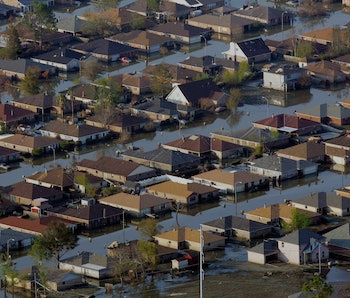 Parts of New Orleans are sinking at rates of two inches a year, and humans are largely to blame. That’s the conclusion of a new NASA-led study that used satellite imagery to identify surface level changes in the city, and analyze the potential causes.

The authors found that the sinking, or subsidence, varies greatly across the landscape, but is caused mostly by humans pulling wellwater out of the ground, and artificially pumping or draining water from the surface. Both of these activities cause soil to compact and sink further down.

This subsidence is a separate phenomenon from sea level rise, although the effects are cumulative. It’s ironic that a lot of human infrastructure designed to protect against the rising seas actually results in greater vulnerability. Just as pumping surface water to dry out a landscape makes it sink lower, building levees to brace against storms inferes with the natural process of waves delivering new material to elevate the landscape.

All of which begs the question, will New Orleans beat Miami to become the first great underwater city in the United States? Recent research has suggested that both are basically screwed but what will that look like?

As the New Orleans study shows, the biggest factor in what is to come is not what the oceans and storms do, but what humans do to prevent, react, and adapt. Presumably, some wealthy areas will be turned into Venetian neighborhoods, full of canals and gondolas, as visitors pay handsomely for a ride to a European café. Residents without status and privilege will be left to fend for themselves, mostly, finding ingenious ways to adapt to a watery way of life, or figure out how to get out and move on.

And some areas, at some point, will become just too far gone, and the marine life will move in. Governments will spend billions to clean up select parts of these new habitats, so SCUBA aficionados and scientists can come marvel at what used to be.