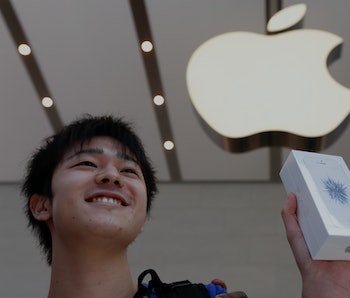 At this stage, everyone gets how Apple works. Every year, the company releases a new iPhone. During odd-numbered years, the new iPhone looks the same as last year’s but with better internal components. In even-numbered years, the new iPhone looks totally different. Rumors suggest, however, that the 2016 iPhone will look basically the same. Everyone, from forum members to the Taiwanese manufacturing industry, is sad about this. If the rumors are true, you probably shouldn’t buy this phone.

The iPhone that’s coming in 2017, however, is said to be mind-blowing.

This year’s iPhone, which may be called the “iPhone 7,” will probably be revealed in September, the same month the last four major iPhones have been announced. The larger-sized “iPhone 7 Plus” is expected to come with two camera lenses on the back, which will improve pictures by using special LinX technology. This would bring better camera zoom and sharper low-light images. It seems like the smaller version will see little camera improvements, although the annoying “camera bump” may disappear.

The larger phone may also feature a Smart Connector, like the ones found on the iPad Pro for hooking up keyboards. Nobody is really sure why this is needed on an iPhone.

There’s also the infamous rumor that Apple might drop the iPhone’s headphone jack. It’s not really clear why that would happen, either. The new iPhone is rumored to be about the same thickness as the iPhone 6s, so it’s probably not to make it thinner. It’s unlikely to be for waterproofing, either: both the Sony Xperia ZR and Samsung Galaxy S7 are waterproof and retain a headphone jack.

Pundits have pointed out that there are other ways to connect headphones, like through the Lightning charging connector or wirelessly via Bluetooth. Those are alright, but you could do that with your current iPhone. It’s not clear at this stage why people would want to upgrade to a phone that does less than their current phone. The mind boggles.

Apple blogger John Gruber, a respected commentator in the tech world, says he’s heard the 2017 iPhone will have a screen that goes all the way to the edge, bezel-free. The home button will disappear, and the fingerprint scanner will sit underneath the screen instead.

“The entire face will be the display,” Gruber said on his podcast. “The front-facing camera will somehow be embedded in the display. The speaker, everything. All the sensors will somehow be behind the display.” If true, the rumor could spell the end of the giant top and bottom device borders.

Embedding the speaker behind the display sounds like magic, but it’s not unfeasible. The Sharp Aquos Crystal, released in 2014, used something called a “direct wave receiver” to vibrate the screen itself, transmitting sound when held to the ear.

Bloomberg also reports that the “iPhone 8” will feature fully wireless charging. When a person steps into a room with a wireless station, the iPhone will start to charge itself without the user needing to plug it in or place it down anywhere. Several companies are competing to perfect this tech, and Inverse has previously interviewed a company called Ossia, which demonstrated a similar system during a press event.

Ming-Chi Kuo, a KGI analyst with a good track record, expects the 2017 iPhone to feature an AMOLED screen, which would mean black pixels would switch off and show deeper blacks than currently possible.

Kuo also says the “iPhone 8” would ditch the aluminum structure and instead opt for an “all glass” enclosure. This sounds really cool but could turn out to be a durability nightmare. It has been suggested on the Apple subreddit that Kuo may mean Liquidmetal, an alloy that technically falls under the category of “bulk metallic glass.” Liquidmetal has some very interesting properties like bounciness and extreme toughness. Apple recently extended its exclusivity partnership with the company that makes Liquidmetal, which suggests this may not be too far-fetched.

The first iPhone was introduced in 2007 to a flurry of hype. It’s only fitting that Apple would want to mark the iPhone’s tenth anniversary by releasing something truly mind-blowing. It may mean waiting a whole other year before upgrading, but at least it’ll be worth the wait.