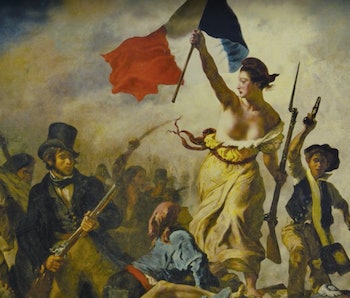 What business do you have here, warmonger?

Sid Meier’s Civilization game series just announced a new version coming to PC in October. As usual, the trailer doesn’t give us any insight on the new game’s interface — it’s just beautiful shots of human civilization and tech, from the Wright Brothers to the two beams of light representing the Twin Towers — but we can glean some details from the language used by marketers and producers in recent interviews.

“Everything that Civilization players have loved in Civilization V, we’re bringing forward, in addition to putting on the new gameplay from Civilization VI,” Dennis Shirk told The Verge. “It’ll be like a warm blanket.” Though Civ VI is intended to comfort and further inspire players of the Civ franchise, there are quite a few updates that will make the new game worth purchasing, including:

Changes to the A.I. leaders in Civ are, in part, inspired by the game’s companion challenge, Beyond Earth, which launched in 2014 with improved interactions with NPCs. Also notable in the trailer is the fact that actor Sean Bean narrates the gameplay, as opposed to the late Leonard Nimoy.

Sid Meier’s Civilization VI will be available for PC gamers on October 21st.

More like this
Gaming
22 hours ago
Hi-Fi Rush reveals a surprising strength of Xbox Game Pass
By Willa Rowe
Gaming
Jan. 25, 2023
Fire Emblem Engage needs to let its characters out of the closet
By Robin Bea
Gaming
Jan. 19, 2023
Eight major trends that will shape the games industry in 2023
By Robin Bea
LEARN SOMETHING NEW EVERY DAY.
Related Tags
Share: