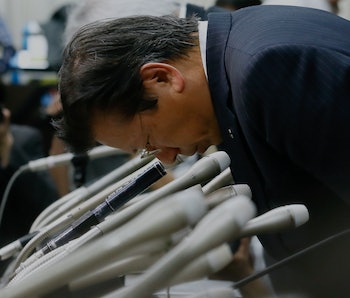 Mitsubishi CEO Osamu Masuko offered a public apology today for the company’s 24-year-long emissions cheating scandal that has decimated its stock price and will likely lead to billions of dollars in settlement payments. The remarks followed the release of a report that found the emissions cheating had plagued all six models of Mitsubishi sold in Japan since 1992, rather than just the four the company had previously disclosed. U.S. officials have begun an investigation into Mitsubishis distributed overseas, but so far the scandal appears to be limited to about 1 million cars sold in Japan.

Japanese car buyers are eligible for substantial government subsidies if they are purchasing vehicles that qualify as fuel efficient. Violating the terms of these emissions tests qualifies as mileage fraud and carries both criminal and civil penalties. Japan’s Transport Ministry had ordered Mitsubishi to release the findings of its internal investigation into the scandal by May 11, including the names of employees who were responsible, but it is not clear whether the company has fully complied with the government request.

While the complete details of the cheating remain murky, Mitsubishi officials have admitted to over-inflating the tires of cars before their emissions test, a Tom Brady-like maneuver to boost their stats without regard to the rules. Some officials at the company also made up data about emissions for their reports. There are currently no reports of widespread software tampering of the kind that formed the basis of the extraordinary Volkswagen scandal.

With one million vehicles suspected in the cheating scandal, car-buyers and auto regulators will likely have no trouble finding grounds to litigate against the company. But both in severity and extent, the Mitsubishi scandal still pales in comparison to the 11 million Volkswagen vehicles found to be equipped with rigged testing software. The devices significantly misled authorities about the emissions output of vehicles, affecting vehicles sold around the world. U.S. authorities alone are seeking $18 billion in fines and about $5,000 for each car-buyer who now must bring their vehicles in for significant repairs.

The updated information sent Mitsubishi stock tumbling when news of a potential scandal first came to light in April. The company had managed to regain some ground before Wednesday’s report sent it tumbling once again. Even if it can rebound to save its stock value sometime, Mitsubishi will undoubtedly compete with Volkswagen for a long time over the unenviable distinction of least trustworthy car manufacturer.