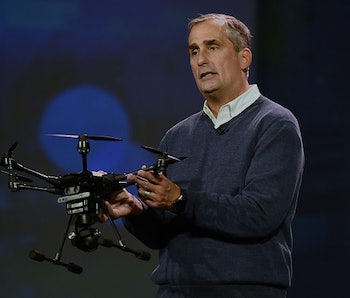 The U.S. government is slowly getting serious about putting together a modern legal framework to accommodate our country’s growing obsession with commercial and consumer drones.

In a new step announced today, the FAA has tapped Intel CEO Brian Krzanich to be the first chair of the Drone Advisory Committee (DAC), which is being created as place where private sector voices can groupthink with the government to ease the introduction of UAVs into the National Airspace System (NAS). The committee will be comprised of executives from the world of drone manufacturing as well as higher-ups in airport management, academia, and relevant government agencies like NASA.

The lead government official on the DAC will be FAA Administrator Michael Huerta. In his announcement of the DAC’s formation today at the annual AUVSI conference in New Orleans, he said that “input from stakeholders is critical to our ability to achieve that perfect balance between integration and safety.”

“We know that our policies and overall regulation of this segment of aviation will be more successful if we have the backing of a strong, diverse coalition.”

The selected leader of said coalition, Krzanich, has a “strong, diverse” background himself. He’s been with Intel since 1982, but he started as an engineer before joining the executive ranks as COO of the company in 2012. Krzanich was made CEO of Intel a year later.

Krzanich is the kind of CEO who both drives a used car and wears work boots to meetings but is also no stranger to giving large keynotes at conferences and, this spring, is even trying his hand at the whole reality TV thing.

As for the executive’s background in the field of amateur or commercial aviation, it’s true that Intel, Krzanich’s company for more than three decades, hasn’t always been a brand associated with drones. But that changed in a flashy way at this January’s CES when Krzanich unveiled the company’s scintillating world-record-breaking drone light show it had organized the November earlier.

The Intel-powered performance featured an unprecedented 100 UAVs synced together and flashing in concert with a live orchestra. In the display’s grand finale, the choreographed quadcopters impressively spelled out Intel’s logo while the company’s famous “bong” jingle sounded.

Whether Krzanich will now be able to help choreograph meaningful and productive drone regulation remains to be seen.

“The creation of the Drone Advisory Council – an excellent step forward for our industry,” he tweeted today after the FAA’s announcement of the DAC.

Intel’s main contribution to the industry of drones is its RealSense accident-avoidant camera technology, utilized in its world-record performance and also in the Yuneec Typhoon H, which Krzanich called the “first truly intelligent consumer drone” when he helped unveil it in January.

Intel doesn’t make a drone itself, but the CEO has been outspoken about the fact that any eventual drone delivery service will need to rely on the still-theoretical-but-upcoming 5G wireless standard. “No matter how good [a 4G] network is, you will have latency,” Krzanich said during a panel at this year’s Mobile World Congress in Barcelona. “The drone needs to stay connected at all times. To disrupt how packages are delivered, we have to have 5G.” Intel was at the conference touting its early focus on developing 5G infrastructure hardware.

Why Intel Is Getting Into Drones

An Intel company VP in an interview in January said that drones are a “particular passion point” for Krzanicha, and it’s why the chip-maker has been getting more involved in aviation technology in the last year.

Krzanich and Intel were invited alongside companies like Google and GoPro to participate in the FAA’s March pop-up committee to help develop drone rules. Krzanich said in a statement about that tap that he was “honored to contribute to the thoughtful work of the FAA” and that drones’ potential “will only be realized if stakeholders come together to address issues of concern to policy makers and consumers.”

Now that the Intel CEO is heading up a permanent committee that fits that description, it’s time to get to work.