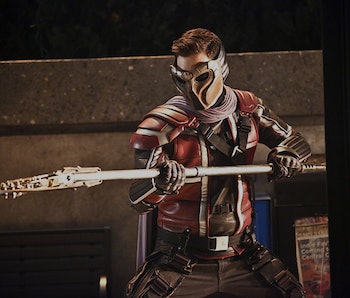 The Flash has vanished, and know one knows where he’s gone. As the CW series The Flash races toward its Season 2 finale, “Rupture” sees Barry Allen (Grant Gustin) and S.T.A.R. Labs gamble with recreating the accelerator explosion that created Flash, and all of Central City’s meta-humans, for Barry to regain his Speed Force. Unfortunately, it fails.

After hiding in the shadows, Zoom (Teddy Sears) makes his presence in Central City known and chases the police out of their own precinct. He recruits the Earth-2 meta-human Rupture, a scythe-wielding cosplayer in paintball armor, who happens to be the doppelganger of Cisco’s (Carlos Valdes) brother Dante (Nicholas Gonzalez). He doesn’t last long, to the horror of Cisco and Dante, and his death at the hands of Zoom (in typical super-villain “you failed me” fashion) brings the estranged siblings closer together at last.

“Rupture” is tight. Though it lacks the usual action since Barry’s is powerless — Cisco uses a hologram projection of The Flash to patrol in the meantime, but it’s a temporary measure — the plot and character dynamics remain electric. Barry feels incomplete without his Speed Force and has a crisis of identity. So his father Henry (ex-Flash actor John Wesley Shipp) returns to provide Barry with some guidance and advice, all while Harrison Wells (Tom Cavanagh) is pushing for Barry to perform the experiment.

The experiment fails, Barry disintegrates before everyone’s eyes, which horrifies Iris (Candice Patton) in particular, as she and Barry had just begun dating. But there’s good news for their relationship: He’s not dead, as the preview for next week quickly spoils, and the experiment may have actually been successful. Twist!

Wally West (Keiynan Lonsdale) and Jesse Wells (Violett Beane) — who is the speedster Jesse Quick in the comics — are knocked out with the accelerator’s wave. The lingering camera and orchestral cues makes it very clear something happened, or is happening, to them. Bank on those two getting nifty costumes really soon.

In the DC Comics arc Flashpoint (which led into the 2011 reboot “New 52”), Barry Allen is powerless and living on an Earth where Cyborg is the world’s greatest hero, Thomas Wayne is Batman, Superman never landed in Kansas, and The Flash never existed. To get his powers back, Barry seeks Wayne’s help to recreate the scenario that gave him his speed. Without the altered timeline and a gun-toting Batman, “Rupture” is very much Flashpoint for The Flash, adapting a relatively new iconic moment in comics for a new medium. But no one needs to read Flashpoint to enjoy the tension felt in “Rupture.” If only Batman v Superman were as willing to loosely adapt its source material to make it easier to enjoy.