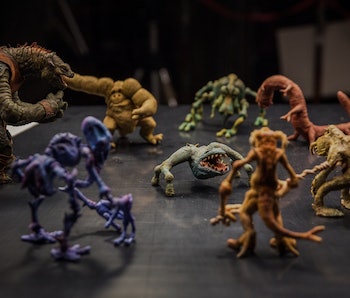 Let the Wookiee win.” Holochess (or, Dejarik) is a tabletop game that mirrors the classic chess board with a circular design and small holographic alien creatures in the place of normal physical pieces. First introduced in Star Wars: A New Hope, the game has its own set of slightly convoluted rules, and fills out the galaxy along other past times among smugglers like the card game, Sabacc. Now, if there’s anything Star Wars fans love, it is immersing themselves in the stories of the saga through any means necessary. HoloGrid: Monster Battle promises just that, with VR technology that puts the player right in front of the board for a rousing game against a friend or a computer.

HoloGrid was created by Phil Tippett, who — along with being the person universally blamed for the horrors of Jurassic Park, as a never-ending joke — designed the original concept for HoloChess and worked on the original trilogy all the way through Return of the Jedi, which he cheekily admitted to working on under the influence of LSD. Today, Tippett announced plans to launch a crowdfunding campaign in order to get the indie game, based off of his original ideas from over three decades ago, onto the VR screens of Star Wars fans everywhere.

Aiming to raise $100,000 for the ambitious endeavor on Kickstarter, Tippett is calling on die-hard fans of Star Wars and his past work to bring the project to life without the limits of a major studio. The game is a collaboration between Tippett’s studio and Happy Giant, which boasts a staff of former Lucasfilm designers itself. The game works slightly different, functioning as a card game in the veing of Hearthstone where players use cards for attack, defense and healing needs. Early bird access for the game starts at a pledge of $25, with a cap of 2500 early access codes.

“This is our first step into a new world of AR gaming,” HappyGiant president Mike Levine says in the Kickstarter video. “While we are launching it on mobile initially so everyone can play it, our long term vision is to bring it to emerging AR and VR platforms.”

At the moment, no release dates for the HoloGrid have officially been announced.

More like this
Gaming
Feb. 1, 2023
Star Wars Jedi: Survivor looks more powerful than you can possibly imagine
By Joseph Yaden, Mike Bloom and Willa Rowe
Gaming
Jan. 26, 2023
9 must-play games coming to Xbox Game Pass in January and February
By Robin Bea
Gaming
21 hours ago
Everything You Need to Know About Xbox’s Planet of Lana
By Willa Rowe
LEARN SOMETHING NEW EVERY DAY.
Related Tags
Share: