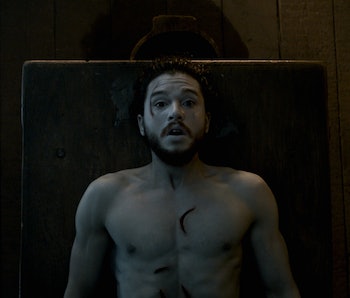 For once, Game of Thrones shocked us all by doing something that wasn’t shocking. Jon Snow returned in the manner that most Game of Thrones fans predicted and after a year of teasing, for once, the show didn’t try to yank us around. The Red Woman did her thing, said her magic words, waved her hands, and voila.

But was there more to it? Was there anything that validates alternate fan theories or offers suggestions as to how Jon’s personality may have changed? If you were too busy hyperventilating— alternately thinking “Holy shit, is this really happening?” and “There’s no way Game of Thrones is actually giving us what we want, is there?” — to pay much attention, let’s slow it down and take a closer look at the mechanics of the ritual.

Many originally thought that Jon’s resurrection would happen in a similar manner (with Melisandre’s aid), but the Wildings and the Night’s Watch would go ahead with burning his body as Tormund suggested, and Jon would arise from the flames — just like Daenerys did in Season 1.

This is because it’s widely believed that Jon is half Targaryen, with his real father being Rhaegar Targaryen (also known as R + L= J). “Home” didn’t outright confirm that, but by introducing Jon’s probable mother, Lyanna Stark, onscreen for the first time, it took a large step in that direction. Actor Isaac Hempstead-Wright, who plays Bran, also told Inverse the Tower of Joy scene was one of his favorites to film, and we will find out “earth-shattering” information. So depending on how you look at it, the fire chalice could be hinting at Jon’s Targaryen blood or, it could merely be the writers acknowledging that original fan theory.

In Season 3 Melisandre threw leeches filled with King’s Blood into fire. This ritual was similar, but curiously the main ingredient was not blood, but Hero Hair instead. This could either be a self-aware nod to the fan obsession with Kit Harington’s contractually obligated luscious locks — and how we used it as proof that Jon Snow Lives — or it could have been done for mysterious reasons to which we are not yet privy.

We’ve seen one other Resurrection by a Red Priest on the show. In Season 3, Thoros of Myr brought back his old friend, the eye-patch wearing Beric Dondarrion. But as Thoros explained, he experienced a crisis of faith before it happened. It seems if there is a Lord of Light, then, they don’t want zealous disciples; they want you to lose all hope before you’re validated — kind of like how Game of Thrones treats its viewers.

Everyone hopes for a miracle

Most people might think resurrection was the only miracle at work here, but there was in fact another: the removal of that loin cloth, because male full frontal would be a true Game of Thrones miracle. Not because we’re pervs, but because Game of Thrones is comically unbalanced in its use of female full-frontal nudity versus male. Kit Harington himself has spoken out about it. But alas, only one miracle was performed on that table.

The room is vacated, with only Ghost remaining

Many theorize that Jon Snow will turn out to be Azor Ahai or the Prince that was Promised. In some legends, the figures are one and the same; in some they’re distinct, but it’s your basic Chosen One narrative. Jon is Harry Potter, Neo, Jesus, Katniss Everdeen. And every Chosen One must be forsaken and alone for a bit. The night is darkest just before the dawn.

Aside from emerging from flames, the other most prevalent theory was that Jon’s resurrection would be aided by him wharging into Ghost. Although that didn’t happen — that we know of? — the writers nodded at that fan theory by including Ghost in the proceedings and having him be the first to notice something is amiss.

Returning from the dead is no picnic

As we know from Beric Dondarrion in Season 3, when you return from the dead, you come back a little bit less. “Pieces of you get chipped away,” he told Arya. Jon’s face when he returns does not echo our glee as viewers. He’s outright panicked. Is it because his memory is affected? Because coming back is disorienting and painful? Or perhaps, like Buffy, he was happy wherever he was and didn’t want to return to the grim world of Westeros? Whatever is going on in his mind, returning is clearly a trauma.

Going forward, it’s unclear how Jon’s altered state will affect his personality. Like Beric Dondarrion, it’s very possible some pieces will be chipped away. Let’s hope it’s his questionable PR skills, instead of his honor.

With Jon’s resurrection, the show had its cake and ate it too: it delivered a scene much like what we all predicted, allowing us all to feel smug and smart while the series tipped its hat to alternate fan theories. The fact that it wasn’t unpredictable is a sign that Game of Thrones — which is sometimes accused of an overreliance on shock value — is maturing at last. We all more or less guessed it, and that’s okay. It didn’t lessen the scene’s tension, and in fact it would come across as hollow if the show did something different, as if it was trying to spite us for having figured it out. This is a rare reward from a show that so rarely doles them out.

Wherever the story goes from here, this scene should put to rest the doubt of venturing beyond the books. The writers are clearly up to date on fan theories, respect them, and include them when they fit, and weave them together in interesting ways. Nobody knows where Game of Thrones or Jon is going from here, and it’s never been more exciting.