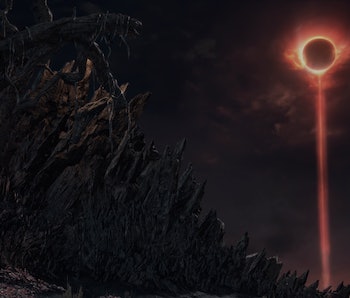 Dark Souls has always been a franchise filled with fascinating stories about the world around the player and the people who live within its borders. Every story is a puzzle with pieces hidden throughout the game’s various boss encounters, collectible items and NPC dialogue – all of which players can piece together to develop a deeper understanding of the Dark Souls universe. Half the time these puzzles aren’t completed within a single game either, meaning that their stories continue on throughout the entire franchise.

Thankfully Dark Souls 3 is an amalgamation of these stories – finishing many surrounding beloved characters from the franchise while adding smaller bits of detail to others. The lore revelations in the last chapter of the franchise may not give Dark Souls fans the closure they’ve desired on certain characters and their individual tales, but it does present some extremely compelling puzzle pieces which shed light on stories we’ve been waiting to see for years.

While the library of stories in Dark Souls 3 is vast, here are some of the most compelling stories scattered throughout the game we’ve found so far.

The Soul of Cinder

Throughout the timeline of Dark Souls, beings of great power have sacrificed themselves to the First Flame in order to keep the embers burning and prevent the Age of Dark from spreading. The first of these individuals was Lord Gwyn, one of the original lords who vanquished the Dragons and claimed the above. As the Age of Fire was slowly coming to an end, Lord Gwyn sacrificed himself to the First Flame to keep it burning and prevent the natural cycle from continuing on. By doing so, he started a trend that would continue for ages where powerful individuals would rise to lordship and sacrifice themselves to keep the Age of Fire alive.

This cycle is one of the key themes behind the Dark Souls universe – one which the player character in Dark Souls and Dark Souls 2 both participate in. In Dark Souls 3 however, the player character rises above the previous Lords of Cinder and goes on to link the First Flame once again. Upon reaching the First Flame you’ll encounter the Soul of Cinder who is guarding the flame from any who might try to tamper with it. During his boss fight however, I couldn’t help but notice that he swapped to a different moveset as I kept reducing his health. Upon reaching his second phase though, he began to utilize a moveset almost identical to Lord Gwyn from the first Dark Souls that included the infamous lightning bolts and heavy-hitting fire attacks. Coincidence? I think not.

Upon defeating the Soul of Cinder and waiting through the credits, I noticed a few new items in my inventory – one of which (The Soul of the Lords) read:

“Since Lord Gwyn, the first Lord of Cinder, many exalted lords have linked the First Flame, and it is their very souls that have manifested themselves as defender of the flame.”

Essentially this item is confirming that every Lord of Cinder who sacrificed himself to the First Flame in order to delay the end of the Age of Fire has become part of this twisted soul; their entire being absorbed by the First Flame and spit out as a crude defense mechanism against intruders. The wild implication here is that both the player character from Dark Souls and Dark Souls 2 also underwent the same process, meaning that you are playing against the very souls of the characters you created in earlier installments of the franchise (provided you sacrificed yourself to the First Flame).

At the beginning of the Dark Souls universe as we know it, four powerful beings claimed Lord Souls from the First Flame in order to fight against the Dragons preventing them from entering the above. One such being was the Witch of Izalith, who fought alongside Lord Gwyn and Gravelord Nito using her relentless firestorms to burn through their numbers. When the Age of Fire started to fade she sought to recreate the First Flame using her own Lord Soul, but it backfired entirely – creating the Flame of Chaos.

When the Witch of Izalith failed to control this new flame it consumed her and molded her into the Bed of Chaos, the source of all demons. Many of her followers were consumed by the Flame of Chaos too, twisting them into demons that started to wreak havoc on the world. Her son because the sorrowful lava demon known as Ceaseless Discharge and two of her daughters (Quelaag and (Quelaag’s sister) managed to escape at a cost: their lower bodies were transformed into demonic spiders. Quelana, another one of daughters, managed to escape completely - moving on to create Pyromancy from the power of the flame.

In Dark Souls 3 while exploring Smouldering Lake you can trick a ballista into firing on a stone brick surface in the middle of the lake, which collapses into what many assume is a small section of the ruins of Izalith. Throughout this entire area you’ll see burning ruins covered with the corpses of charred demons, suggesting that this is a location where the remainder of the Witchs followers fought against her and the demons she created. This is further hinted at as you find Quelana’s Pryomancy Tomb on a dead body curled up to a half-spider body resembling Quelagg, suggesting that Quelana returned to one of her sisters and decided to stay with her until she died.

A recurring theme from the first game in the franchise, the Abyss has been a consistent threat within the Dark Souls universe. Created to combat the Four Kings and their loyal knights after they were seduced by evil, the Abyss is an area of darkness located underneath the Ruins of New Londo.

Throughout Dark Souls lore many have tried to enter or leave the Abyss, all of whom were hunted down by Artorias of the Abyss. Eventually Artorias was consumed by the darkness himself and a new line of defense was needed to combat the Abyss, which we now know were the Abyss Watchers.

More like this
Gaming
19 hours ago
Nintendo Direct Mini is everything wrong with game showcases
By Willa Rowe
Gaming
21 hours ago
How Ace Attorney spawned one of the most enduring character ships ever
By Hayes Madsen
Gaming
18 hours ago
10 intriguing Switch game reveals from the Nintendo Direct Mini
By Robin Bea
Related Tags
Share: