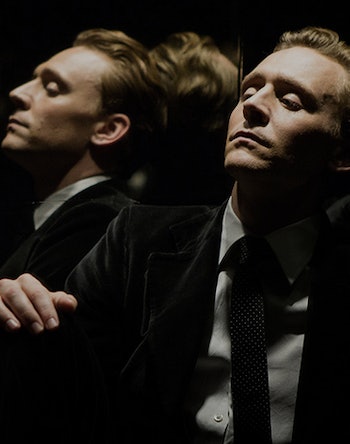 Ben Wheatley first read J.G. Ballard’s novel High-Rise when he was just 17-years-old. The violent, searing satire earned a permanent place on Wheatley’s shelf, and when, in his early 40s, he became a successful enough filmmaker to option the adaptation rights to beloved literature, the Ballard novel was his first choice.

The book, about a futuristic planned community living in a high-rise building in London, was published in 1975. After Wheatley won the rights to the book (and there had been various attempts to make it into a film over the years), he made the crucial decision to set the film in the ‘70s. It gave his cast — which includes star Tom Hiddleston (who plays posh new resident Dr. Robert Laing), Jeremy Irons (Royal, the building’s mastermind) Sienna Miller, Elisabeth Moss, and Luke Evans — the opportunity to dress in period costume, and gently offer up some serious social criticism.

“For me, it always felt like the idea of science fiction and period movies are both ways of talking about now, only through a different filter,” Wheatley, the filmmaker behind standout indies A Field in England and “Sightseers, told Inverse*. “Which kind of allows you to step back as an audience member and take what you want from it but not feel like you’re being heckled.”

Wheatley’s decision worked thematically — the era’s growing income inequality and class conflict mirrors the current economic stratification — and visually, given England’s mid-century reliance on gigantic, Brutalist structures that emphasized function over form. Some of those buildings still dot the country’s urban centers, but it proved just about impossible to find a single building that offered all of the amenities that were offered to the richest residents of the fictional super-structure Ballard had dreamed up.

Instead of seeking out a high-rise, Wheatley and his team decided to use an abandoned structure they found in Northern Ireland, which boasted the raw materials for several of the posh interiors they needed to construct.

“It wasn’t one building,” Wheatley told Inverse. “It was a sports center that was built in the 70s. It had things like the swimming pool and the squash courts and gyms. Then on the basketball courts we built the apartments as standing sets.”

For the exterior of the colossal building, Wheatley and co. relied entirely on visual effects. The titular high-rise never existed, as it was made entirely with CGI by the acclaimed firm Milk VFX, which won an Oscar this year for its work on Ex Machina. The company did such a great job that Wheatley has been asked what was real and what was CGI since the film premiered in Toronto last fall.

“We’d say, do you not know?” Wheatley delighted. “That’s fucking great. The building’s exterior wasn’t real. Everything else was practical. On the sets, some of it was built, some of it wasn’t. But most of it was. We tried to achieve a lot of it practically if we could, just because it’s easier.”

During production, they had the run of the physical locations, and were able to desecrate the structures they had either built or tidied up. The film becomes ultra-violent as the high-rise begins to cripple from eroding services; the shut down of essential resources spurs the building’s less wealthy residents first to unite against the architect, and then wreak havoc on the luxuries enjoyed by their richer neighbors, who literally live above them.

Evans’ character, Wilder, is unemployed and reminded every day of it by his wife, who needs him to return to work to help support both their children and upward ambition.

“That exists a lot in the working class, and areas I come from in South Wales there’s a lot of that going on,” Evans says. “Thinking about whether to buy a new house instead of an old terrace miner’s house, with running water, a lot of the time the toilets were outside not inside. There’s always something better to attain. My character’s wife is constantly reminding him that she lives in the shade and they don’t have access to the swimming pool.”

As hell breaks loose, the film, along with its characters, begins to lose its grip on reality; as the building shakes, the fundamentals of the universe also seem to go askew. The swirl of psychosis allowed Wheatley to play with the images the viewer sees on screen, creating a controlled chaos to fuel the unmitigated madness in the frame.

“My favorite bit of the movie was we ended up building a kind of box that went up two or three stories high and it had a mirror at the bottom, and then we threw doll’s furniture down on fire and that’s in the film,” Wheatley said, glowing as he spoke about his gambit. “We were all standing there saying, ‘This never gonna work and then it was like oh my gosh it works, this is amazing.’”