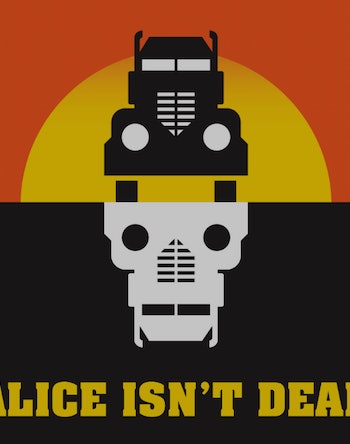 Welcome To Night Vale is the spookiest, weirdest, and most successful podcast of all time. Joseph Fink, one of its co-creators, has spun off from his hilarious nightmare to make a bizarre new project, Alice Isn’t Dead. The story follows the a truck driver who searches across America for the wife she had long assumed was dead. In the course of her search, she encounters not-quite-human serial murderers, towns literally lost in time, and a conspiracy that goes way beyond one missing woman.

The podcast shares DNA with Night Vale but is something much, much darker. Alice Isn’t Dead starts with a declaration from the narrator: “This is not a story. It’s a road trip.” The aim is to “end up somewhere else” and to travel “a long way from where we started.”

Inverse sat down with Mr. Fink to discuss his hatred of H.P. Lovecraft and his love to being on the road until he’s on the verge of a nervous breakdown that definitely didn’t happen yet.

You’ve got one of the most important podcasts of all time. Why a second one?

Why a second book? Why a second movie? You have lots of ideas. You’re not going to always have time to do something with that idea, and it takes months to do something with an idea. I’d been working on it in the corners of the time I had and it seemed worth turning into a thing. You can’t do that with every idea and this seemed like the one for me.

Has the constant touring for Night Vale live shows been the road trip impetus for the serialized narrative of the new show?

A great deal of it. Live shows started in 2013 and since then we’ve put in two and a half years of fairly intensive touring. It’s the reality I’m living in right now. I see all these places I never would have seen. Oklahoma City is real. I just never had a reason to go there. It’s fun to see how things are different across the country. It’s a lot of subtle differences.

Chain restaurants are a visible thing. They change as you move and people don’t know what you’re talking about. The landscape and language. If you’re in early spring driving from the north-east down south, you’re literally driving into spring. That’s fascinating. I’m setting these stories in real places.

In listening to Alice, this show is less funny and more directly creepy than your original outing.

I wanted a different tone. It was always inherently a comedy on Night Vale and Alice is a straightforward horror story or thriller. It’s somewhere around there.

The story starts with a focus on same sex couple which is exciting. Why did that fit with the story you wanted to tell?

This story structure of looking for a significant other can be done with any configuration of people. Traditionally, it is almost always a man searching for a woman. It doesn’t have to be that. It can be genderqueer. Why not? I knew from the start I wanted Jasika Nicole to perform this. It seemed completely natural.

I think the first big project I remember you being involved in was the book A Commonplace Book of the Weird which took a book of H.P. Lovecraft’s unused story ideas and assigned them to a group of modern authors. Where’d the idea for that come from?

That was just me. I was looking for projects. I stumbled on that list of unused stories, and I don’t even like Lovecraft. I had just moved to NYC and I knew all these writers, and they all seem to be much, much better than you.

Being surrounded by more talented people is a threat that pushes you, so I used that list and a random number generator to force them to do their best to fulfill Lovecraft’s terrible prompts. I got a lot of help from friends but I did the layout for the entire book in a home greeting card making program, which is a terrible way to layout a book. Then I did What It Means To Be A Grown Up and at 24 that seemed like a pressing question. I just wanted to make things.

I’m fascinated by the live show you built for Night Vale, which features elements that can be switched out based on guest availability.

There isn’t really one live show, because we’ve had three touring scripts and three other — Jesus, we’ve done six? Six. The basic approach we take is not knowing when someone can be there. We love to have everyone so we have to make it work. Like with guest Hal Lublin. We could make scenes that inform the plot without controlling it.

Sometimes similar scenes will accomplish the same function and that’s how we build it. The live show is very important to us. Everyone who comes out to help us make this comes from live theater. We’re always trying to challenge ourselves. The Investigators” live script pushed the limits of audience participation. We wrote the show about that. Our touring script right now called “Ghost Stories” is very different. It goes the opposite way with energy. It is quiet and creepy and sad and we think that’s very different.

I assume you’ve got a plan for Alice live shows?

My booking agent just asked that. That sounds great. I have to clear things off my plate first. I’m sure it will happen because that’s integral to what we do, but we also don’t half-ass that. I need it to work as self-contained theater and that takes mental effort.

With Alice you’ve launched the Night Vale Podcast Network. What else is coming?

“Night Vale Presents” is a system we understand but it won’t be a media empire. We won’t get fabulous rich off of this. Alice is our first. Jeffrey has a new podcast coming out late-spring that hasnt been announced yet. We are working with other artists to launch similar shows in 2016 and 2017.

When you started, Night Vale was one of the only shows doing this fictional serialized work. Now there are more, like The Black Tapes and Limetown. Do you listen to or enjoy those shows?

I enjoy some of those shows. Black Tapes and Tannis are something I enjoy and listen to. I think they are great people doing a great show. They are having fun with it and they are fun shows telling fun stories. I’m excited about a few others. Recently, the show The Truth did a spin-off called Songonauts that’s a podcast musical about a band having adventures. I’m excited about that on a concept level.

There’s room for fiction podcasts in the same way non-fiction podcasts go everywhere. Fiction so far is lacking in variety. I would love there to be a procedural detective podcast. If one of those romance authors from weird sexual Amazon Kindle world did a romance podcast, that would do very well.

So Alice is happening in a tightly limited, serialized format. What spoke to you about that?

Time management? That. Night Vale takes up a lot of my life. By necessity it had to be the way it is, so I wrote towards that. There will be other years of Alice; it’s just about finding space in my life to build another season. It don’t want to rush through anything. I just want to make sure I have time to do that well.

I’m really fond of “Best Of” because that was very collaborative. Usually, it has been one of us mostly writes the script and we edit together. I’ll do sound production from Disparition cues, and on “Best Of” we built the story together and wrote two halves while giving each other prompts and then Jon Bernstein produced it for us. The stuff he does on the episode is beautiful.

And James Urbaniak as the previous host of Night Vale was just fantastic. Any chance to write for his voice is a gift.