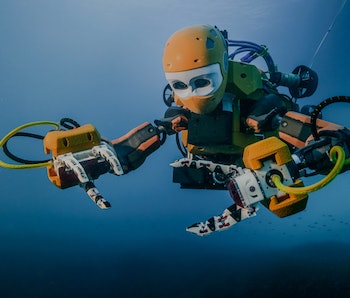 The surface of our home planet, when compared to outer space and the deepest parts of the ocean, is pretty well explored. We’re not quite at “no stone unturned” status yet, but we’ve seen a lot of it. But under the 70% of the Earth’s surface that is covered by water, human beings don’t do so well — we tend to have lot of problems with breathing and seeing and just generally not dying in the ocean. Fortunately, the brightest minds in computer science and mechanical engineering are getting pretty damn good at creating robots that can explore the deeps for us. Earlier this month, a cheery orange humanoid robot named OceanOne managed to swim down into La Lune, the 17th century wreck of France’s Louis XIV’s flagship, resting 100 yards under the Mediterranean sea.

Behind the controls, Stanford University professor Oussama Khatib watched through OceanOne’s eyes as the robot navigated the shipwreck. OceanOne is about 5 feet long, with a humanoid torso and a mermaid-like tail section, studded with thrusters and sensors to keep the mer-bot swimming. The thrusters also keep OceanOne stable, so when Dr. Khatib saw a grapefruit-sized vase, they engaged to hold the mer-bot steady while he used the joysticks to carefully pick up the vase with OceanOne’s three-fingered hands. He carefully swam over to a collection basket and placed the vase inside and boom — OceanOne had recovered its first piece of sunken treasure.

Dr. Khatib is still in Paris presenting the vase and OceanOne’s other findings, but Inverse caught up with Xiyang Yeh, one of Dr. Khatib’s PhD students on the OceanOne team. Yeh said the robot’s biggest advantage is that it can cooperate with human divers, using similar diving hand gestures and fitting into the same spaces human divers can. The extremely dexterous arms are fitted with haptic feedback sensors, so the pilot at the joysticks can feel the shape, weight, and balance of objects that OceanOne picks up. And they also work pretty well for keeping OceanOne out of trouble — on the deck of La Lune, OceanOne got stuck between two rusting cannons, pinned in place to firmly for his thrusters to get him out.

“It was pretty worrisome,” Yeh laughed. A disaster on OceanOne’s first voyage wouldn’t have been a good start for the project as a whole — especially as the bot is currently one of a kind. But Khatib used the OceanOne’s arms to push itself off of the deck, forcing its way out from between the cannons.

The other problem, Yeh said, was the engineers hadn’t realized how difficult operating a fine-tuned set of joysticks and a heads-up visual display would be on a rocking boat on the open ocean. Before exploring La Lune, OceanOne had only swam around in swimming pools on dry land.

Yeh said the bot can be scaled for deep-sea versions, although the prototype was only set up to dive down to about 100 yards. The OceanOne team wants their robotic co worker to eventually find work in disaster relief, ship repair, oil and gas drilling, and other oceanographic research aside from exploring shipwrecks.

“OceanOne will be your avatar,” Khatib said in a news release. “The intent here is to have a human diving virtually, to put the human out of harm’s way. Having a machine that has human characteristics that can project the human diver’s embodiment at depth is going to be amazing.”

Yeh said that the team’s end goal is to have a fleet of OceanOne divers that can interact and work cooperatively with one another. He thinks they could have four to five more prototypes in the water in the next four to five years.

Check out a video of OceanOne in action below.