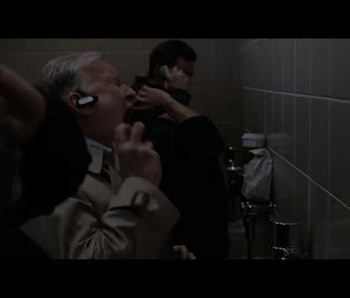 The first trailer for Cell, a techno-zombie-thriller based on the Stephen King novel of the same name is here, and we get to see what happens when you put John Cusack and Samuel L. Jackson in the woods together being chased by a horde of axe-wielding zombies controlled by their cell phones.

The trailer sets up the premise pretty quickly: everyone has cell phones, but the cell phones are evil, and now everyone is a zombie, except for John Cusack, who is in an airport when everyone becomes a cell-phone-zombie. We know this because there are many shots of people freaking out while on their cell phone, and then making zombie sounds, and then generally causing chaos and violence. John Cusack gets on a train and a woman asks him if it’s terrorists, to which he doesn’t really respond, but says “don’t use your cell phone.”

Ostensibly this movie is rooted to an emotional center of Cusack trying to find his son, who he was talking to on the phone in the very beginning, but now can’t talk on the phone to because cell phones are evil now.

At some point, a grizzled-survivalist Samuel L. Jackson comes in, wearing a cool camo vest. He then proceeds to say lines like “Good *always conquers evil” with all of the usual force and delivery he uses in every movie, even ones that require him to say lines like “good always conquers evil,” in a setup where a clear good-evil dichotomy hasn’t really been established. The Hunger Games’s Isabelle Fuhrman is also starring in the movie, but she doesn’t get any lines in the trailer.

The film is based on a Stephen King novel, because what isn’t based on a Stephen King novel at this point? Tod Williams (Paranormal Activity 2) is directing, and King himself wrote the screenplay, with Adam Alleca, so there’s at least a good chance that fans of the novel will see some of the themes and scenes in the book constructed faithfully. King’s source material worked well for 11.22.63, but we’ll see if Cell can stand up on the big screen.