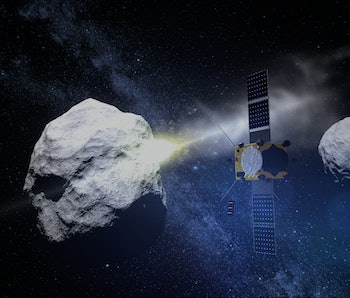 Your odds of being killed by an asteroid are about one in 700,000. That’s a low probability, but not compared to the lottery. And it goes way up if the asteroid is big. A sufficiently big space rock could defy the odds and wipe human beings off the face of the cosmos. Good thing only one percent of the million-plus asteroids zipping through the solar system have the potential to hit us. Still, not totally comforting.

Every 35 million years or so, a mass extinction event seems to afflict our planet. Enter the Asteroid Impact & Deflection Assessment mission, NASA and the ESA’s plan to learn more about the physics and motion of asteroids and to assess to how we might be able to prevent an oncoming rock from pummeling Earth.

As it turns out, Armageddon and Deep Impact are fun movies, but if we were actually threatened by an asteroid, we would be insane to try and blow a bomb up on the damn thing. Instead, our only feasible recourse would be to push it out of the path of our orbit just enough that it will miss us by a comfortable margin.

AIDA is composed of two parts. The first is the ESA-led Asteroid Impact Mission, or AIM. Basically, the AIM spacecraft would find and orbit what’s called an asteroid moon: a object that orbits a minor planet as a natural satellite. Under the current proposal, AIM would target 65803 Didymos — an 800-meter wide rock with its own 170-meter wide moon. It’s basically a binary asteroid system, in which one asteroid is orbiting another.

65803 Didymos is thought to be the most reachable asteroid system to the Earth, and should approach the planet with a distance of 9.9 million miles early next decade. Best of all, its path does not cross Earth’s orbit, so there’s no concern that any experiment could lead to the pair of rocks suddenly heading on a trajectory towards us.

AIM would be fitted with a navigation camera, its own lander probe, a slew of instruments to help study its external and internal composition, and a pair of CubeSats for third-party research. The current AIDA proposal — which is still in flux — calls for launching AIM in October of 2020.

All that is just the boring part, however. AIM is supposed to be followed by the launch of the NASA-led Double Asteroid Redirection Test (DART) spacecraft in July 2021. That 660-pound bugger would not possess any kind of scientific payload except for a small camera for navigation purposes, and would be expected to rendezvous with 65803 Didymos and AIM by October 2022.

DART would have only one purpose — smash into 65803 Didymos at over 13,000 miles per hour. The spacecraft would be completely destroyed, of course, but that’s the point. Afterwards, AIM would check to see whether that impact into the asteroid caused any noticeable effect on the asteroid’s motion and trajectory through space.

NASA and ESA are hoping that the kinetic impact of DART on the asteroid will be enough to understand just what kind of effect a full-on collision a heavy object could have on an asteroid. To boot, if DART were to cause a change in the orbit of 65803 Didymos, it would be the first time humans have altered the orbital dynamics of an extraterrestrial body in the solar system in a significant way.

Although AIDA’s primarily goal is to learn about asteroid movements and fit this information into how we can protect the earth, there’s another big implication behind this experiment: how to use this data in the context of space mining. As the world’s space agencies and private space companies beef up efforts and plans to pull up resources out of the moon and asteroids, we’ll want to know exactly how our own activities on these rocks could affect their own orbital dynamics — and whether that puts Earth at risk.

In any case, I think it’s pretty easy for everyone to agree the prospect of smashing a spacecraft into a rock that’s flying through space is pretty fucking cool.