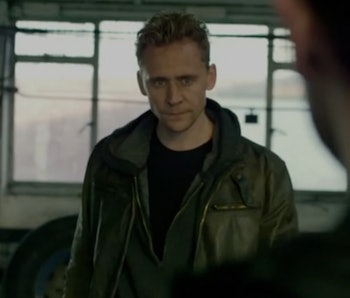 The Night Manager is now two episodes deep, and you’d be forgiven for not being sure who the good guy is here. As former soldier Jonathan Pine (Tom Hiddleston) gets closer to enacting revenge on “the worst man in the world,” arms dealer Richard Roper (Hugh Laurie), our hero’s motives are becoming somewhat muddled as he descends into the darkness.

Pine is far from alone in his murky expedition, as he’s supported by Angela Burr, an MI6 agent who will stop at nothing — including getting Pine killed — to bring Roper down.

What’s so fascinating about the mini-series’ second episode, though, is that while we’re allowed to see a glimpse of the depths to which Pine and “the good guys” will sink to get their man, we also gain insight into the bruised, vulnerable psyches of our villains.

Episode two also provides a hint of the ruthlessness Jonathan Pine (Tom Hiddleston) can summon up. Over the course of a single hour of television, he manages to force heroin on someone, sleep with and subsequently set up a local townswoman, and break an agent’s arm in three places. If last week proved Pine capable of keeping a cool head in a dangerous situation; this week illustrated his talent for manipulating the people around him to his own end.

Sure, Jonathan Pine is the hero, but this week he also seduced a rural British townie (Hannah Steele) so that he set her up to walk into an apparent murder scene.

Obviously, Pine’s quest to bring down Roper requires a certain level of secrecy — and it’s plain that lying to Marilyn wasn’t east for him — but, it’s nonetheless self-serving behavior that has a noticeable impact on the young woman.

Later in the episode, when Pine asks some agents to stage an attempted kidnapping of Daniel, he double-crosses his own colleagues, breaking a man’s arm in three places and earning a few bashes to the face with a metal pot. That’s to say nothing of the fact that Pine’s plan involved gambling with the well being of a child. It’s yet another demonstration that Pine is a man who’s pursuing his own ends with little regard for the damage it does to the world around him.

Agent Angela Burr seems to revel in her solidarity. She sees the people around her as mere chess pieces, an outlook she makes abundantly clear in her recruitment pitch to Pine. She’s studied his army brat past, his devotion to his father, his obvious guilt over Sophie’s death, and she’s prepared to use all of this knowledge to get him to do what she wants.

Olivia Colman, as Burr, gives the episode’s scene-stealing performance, the tenacious agent who’s desperate to get Roper in cuffs. Colman has always delighted when she’s on screen (her range is tremendous), but Burr is perhaps the brightest moment in the actress’ brilliant career. As Burr, Colman is transparently ruthless in her willingness to sacrifice Pine in any way she deems necessary to get to Roper. Her first piece of advice for Pine: find your inner psychopath. Burr is aware of the emotional toll this will take on Pine, and she even tells him as much; she just doesn’t care, as long as it means catching Roper.

The Bad Guys Aren’t So Bad

When the episode opens, Roper’s mistress Jed (Elizabeth Debicki) is prepping to go out for the evening, with a routine that includes popping some serious pills. Before she’s completely finished, she gets a call from her mother. There’s obvious tension, to say the least. When Jed asks about someone named Billy (presumably her son), Jed’s mother responds, “As if you care; they say he doesn’t even ask about you anymore. Jed says she’s sending more money at the end of the month and by way of thank you, her mother calls her a dirty whore.

It’s keen insight into Jed’s character. She’s obviously had a damaged upbringing, though she seems loyal to that world, even remorseful about her present company. Yet, Jed sees in Roper’s money a means to an end, which immediately casts a more sympathetic light on the young woman. It’s also telling that, rather than share this information with Roper, Jed puts on a happy face (with the help of some pharmaceuticals, of course) and proceeds to spend the evening cooing over Roper’s young son, Daniel (Noah Jupe).

Oddly enough, the series’ villain gets the best opportunity to act selflessly in episode two. In a speech early on, Roper proclaims to the UN (under his humanitarian guise) that he only acts selfishly. It just so happens those selfish actions have the result of making his business easier. Of course, another tangible result is an improvement in the quality of life the world over. In spite of the fact that his words are selfish, the ends are notably populist.

Further, when an enemy has a gun to Daniel’s head later in the episode, Roper calmly sets about securing his son’s release as safely as possible. He shows little regard for the amount of money it would take, even going so far as to offer to have a hundred grand delivered inside 15 minutes. When it’s discovered that Pine has been beaten to within an inch of his life, Roper wastes no time getting him medical attention despite the fact that he can tell the battered Pine is a total fraud.

The world of The Night Manager is cloudy, to be sure. Before the end of the show, more innocents will get hurt. While the audience has been told rather firmly that there’s a monster lurking inside Richard Roper, to date the only beast we’ve seen is Jonathan Pine, who channels his guilt into a cold rage that threatens to spill over to anyone standing near him.

When the price of simply getting inside Roper’s organization has already resulted in such harsh collateral damage, it’s impossible not to question the long term good that his mission can yield.