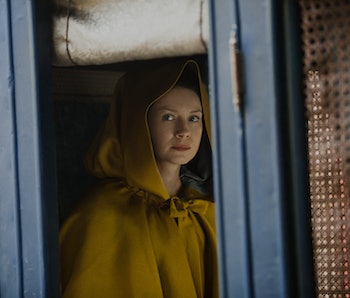 Outlander is filled with sass, schemes, snarky Scots, and sex. Each week, we break down the most noteworthy moments. Let’s dive into Season 2 episode 3, “Useful Occupations and Deceptions.”

Claire’s sass this week spans both poles: winning and irksome. Her sex-ed to Mary Hawkins (“Mary, I believe we need to have a little talk”) and her bitch-please reaction to Master Raymond looking cozy with the Comte St. Germain (“are you always that friendly with your so-called enemies?”) fall into the former category. Claire is anything but a chameleon: She stands out boldly against her surroundings, speaking up anywhere and everywhere. In situations like these, it’s charming and winning.

That said, her time at the hospital falls into the “irksome” category of Claire sass. While her frustrations about feeling useless are sympathetic, it puts the show in a difficult position. By tethering its narrative so tightly to Claire — resting on the shoulders of her voiceovers and characterization — when she feels aimless, so too does Outlander. The episode picks up again towards the end, but for a while, as we watch Claire play nurse in a manner that has seemingly nothing to do with the plot, we echo Claire’s sentiments: She feels like she’s lost her sense of purpose in Paris; likewise, the show has stagnated.

Just like last week, Murtagh is once again the highlight of this episode. He’s really proving to be Outlander’s MVP. This time, his role is less comedic and more supportive — his eye contact as Claire hugs Jamie at the end, unwilling to ruin his happiness with the news about Black Jack, is a standout moment — though he still gets some time in for some business with Claire’s maid.

Jamie continues to show off his political savvy this week, though just like Claire, his story arc picks up in the latter half of the episode. The first half delivers clunky dialogue like this line: “What is politics but chess on a grand scale?” Jamie says this as he plays chess — get it?!— just in case the metaphor didn’t beat us over the head enough.

But once Jamie employs Fergus (“Actually it’s Claudel but we agreed that wasn’t very manly”), things start looking up for both Jamie and Outlander.

When Jamie explains his intentions about using Fergus to steal letters and Claire compliments his plan, the look on his face does more to dispel the tension between them than any dialogue could.

Outlander is at its best when characters aren’t overtly explaining their motives, whether it’s via voiceover or while playing a literal/metaphorical games of chess. This is reflected in Jamie and Claire’s relationship, too. When the show drags itself down with overly long scenes and unnecessary exposition, Jamie and Claire’s relationship is less compelling. He becomes a domineering husband, she a frustrated housewife; and it’s fun for neither characters, nor viewers. When the writing is tighter, their relationship is still tumultuous (Claire’s decision to keep Black Jack’s mortality a secret) but their dynamic is far more interesting to watch.

Certainly, the novel Dragonfly in Amberis laden with pacing issues and the show has done an admirable job at distilling it into a coherent story with a stronger sense of purpose. But as Claire says, “Prince Charles is long on rhetoric and short on specifics.” The same description applies to Dragonfly in Amber, and Outlander dips into that rabbit hole in the first half of the episode. Though “Useful Occupations and Deceptions” meanders, the tense ending, welcome addition of Fergus, and the return of the gloriously sneering Comte St. Germain are all auspicious signs for the future.