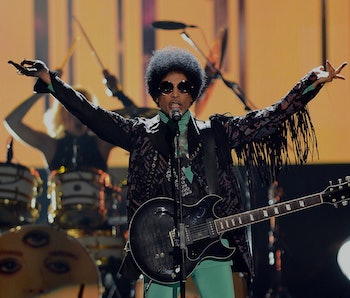 Tucked away in the Chanhassen suburb just outside of Minneapolis, Minnesota, a large, conspicuous, structure known as the Paisley Park compound sits on nine acres. The compound was the home and recording studio of the late Prince Rogers Nelson, who died early Thursday morning at the age of 57.

Crowds gathered around Paisley Park in remembrance of the musician, whose death was announced shortly after he was found in an elevator at his compound. News crews and cameras assembled outside of the fence as a serendipitous rainbow formed over the building. On the outside, the building closely resembles a business park or factory. On the inside, it is a veritable wonder house — composed of studios, conference rooms, and places to party.

Whatever happens, it is certain that the location perfectly described Prince from the moment time he made it his part-time residence in 1987.

According to a Time article about Paisley Park in 1996, the inside of the building had an illustration of Prince’s eyes with a “godlike sunburst” shooting out between them. The same article describes his office’s stained-glass doors and the large glass pyramid on top of the building. The pyramid was lit purple whenever Prince was inside.

“The sound stage has been used for everything from rock videos to Hormel chili commercials. The recording studios are state-of-the-art, and so too, in its way, is Prince’s private office, which features three beds (king, round, day), one mirror (over the king), sofas, chairs and a desk — all built large-scale.”

His $10 million, 55,000-square-foot home is covered in purple. “Not exactly 50 shades of it, but close,” an Entertainment Weekly story describes.

Paisley Park sounds prime for partying. But the professional aspects of the building are, arguably, more impressive. According to Marshall Long Acoustics, there were four main studios and every single room was wired to pick up sound so that Prince could record — no matter the room.

“There are certainly people who can afford it,” Dolly Lenz, a luxury real estate broker, told realtor.com. “But most people I’ve met from Minneapolis are conservative, Midwestern, low-key people, not the types that want to flash money.

One alternative, a Minneapolis real estate agent said in the same story, is that a developer might bulldoze the place entirely and build houses on the land. Of course whatever happens to his physical estate is superfluous because his music and influence will live on.

Correction (4/22/16): In the original version of this article, a picture was captioned Paisley Park, when, in fact, it wasn’t. The article as been edited to reflect that.