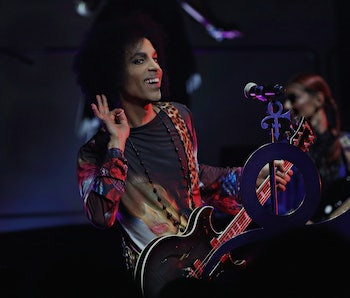 Prince Rogers Nelson died today at age 57, but he is survived by his music.

Prince produced hit after hit starting in the ‘80s, and wrote songs for other artists. He released 15 albums under various pseudonyms with different bands and under different record labels. But his influence remained consistent.

Another constant was controversy over who controlled his music. And because of that, fans who wish to pay tribute by sharing and listening to his music may have a hard time finding his songs or streaming them on Spotify.

Prince has more than 40 studio and live albums, and most of them aren’t on today’s most popular streaming and video services. Jay Z’s Tidal streaming platform, which charges $9.99 a month, is currently the only place all of Prince’s recordings can be found together.

If you don’t have a Tidal subscription and don’t want to download the first month free trial, here are five other places you can listen to some (or some form) of his music.

Entire songs and official versions aren’t on YouTube. There are however, some low quality recordings like the one above if you do some searching.

Streaming isn’t an option here, and his music can’t be found on the Apple Music subscription channel, but his singles can be purchased on iTunes for $0.69 or $1.29, and entire albums can be purchased ranging from $9.99 to $24.99. Is that really too much to ask?

Hoopla a service that lets people borrow movies, music, and books online with their library card, has some of Prince’s classics. You just have to have a library card.

Channel 50, AKA The Groove, is streaming music from Prince’s entire 30-year career, as well as the Entertainment Weekly Radio, Radio Andy, and 80s on 8 channels.

More like this
Gaming
3 hours ago
We Are OFK can't deliver on its promise of musical spectacle
By Willa Rowe
Gaming
8.9.2022 6:46 PM
League of Legends Star Guardian concept art is an emotional trip
By Robin Bea
Entertainment
8 hours ago
Rings of Power Season 2 will feature a fan-favorite character Peter Jackson snubbed
By Alex Welch
Share: