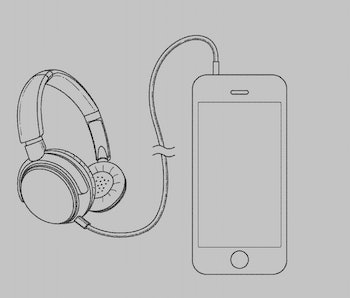 It’s no secret that nobody wants Apple to ditch the classic headphone jack on the iPhone, especially the 240,000 individuals who signed a petition asking the company not to. But rumors that Apple is moving in that direction gained steam on Thursday with the release of a patent describing a headphone that links to a digital device through a Lightning connecter cable and not the 3.5mm TRRS (Tip Ring Ring Sleeve) jack we all know and love.

It’s worth noting that, if Apple thinks that ditching the headphone jack is the way of the future, the iPhone-maker is already falling behind. LeEco released three phones without jacks on Wednesday, requiring users to use USB-C compatible cords to link into their headphones. Though for mid-tier phones, the remarkable 6GB of RAM in the Le 2, Le 2 Pro, and Le Max 2 may also show what is possible when these companies save even a little space on the interior of the devices.

The Apple patent describes a headphone that is capable of switching seamlessly between wired and wireless connection. It’s a strange design, because it is not immediately clear what problem the company is trying to solve. That is, until you look at it as the beginning of Apple making the most out of a connection that combines the Lightning port and headphone jack.

Since the cord in the patent is compatible with both digital and analog signals, the connector can relay audio signals and charge the phone. It also raises the possibility that Apple may be trying to increase the features available to a headphone. A Lightning cord that could both charge and control a headphone would make more complex data transfer easier by limiting inputs, thereby reducing the chance of audio loops corrupting sound quality.

A headphone with this design could theoretically send information back to the iPhone, including giving the user control over apps without touching the phone. That means you may be able to do more than skip songs from your headphones but possibly search for new ones or even switch from Pandora to Spotify.

This design also paves the way to solving the biggest problem with Apple’s plan to ditch the headphone jack: simultaneous charging and audio playback. While this patent does not explicitly lay out the functionality, it does seem that at least wireless audio will be available to a user charging their headphones. Though the problem remains for those without Bluetooth compatible headphones who will still need to purchase an adapter just to listen on their iPhone.

But the overwhelming sense is that ditching the classic jack does not really boost the user experience of a headphone. Apple is simply trying to mitigate the damage so it can have what it really wants: more space to play with in the iPhone. It certainly is true that having both a headphone jack and a Lightning port takes up space Apple could be using for phone internals, and combining the two seems like a dream the company is quickly bringing to fruition.

So whether you like it or not, the post-headphone jack iPhone appears inevitable, and Apple is just figuring out how to make it suck the least. This patent definitely doesn’t cut it, but if it finds a good use for all that extra space, the shift could be interesting. Shifting between wireless and wired audio is one thing, but no-touch touch screens is another ball game altogether.