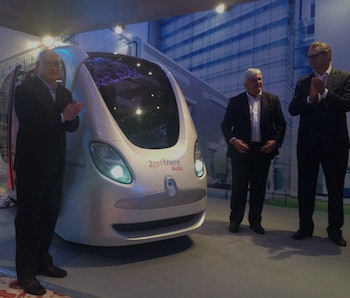 Singapore will have an autonomous electric transit system on the road by the end of this year.

The country’s SMRT public transit system announced a partnership today with the Dutch firm 2getthere for sustainable first- and last-mile transport. It won’t be used by the masses or change the face of the city’s major roadways, but it is a notable step toward autonomy and sustainability.

The vehicles look more like stretch versions of Google’s autonomous pods instead of offering the slick lines of a Tesla, though. The system is essentially a bus service (without a bus driver) that operates on a designated roadway and makes requested stops. Or, as 2getthere’s website describes it, each pod “basically operates as a horizontal elevator.”

Each pod will hold up to 24 passengers (eight people squeezed into seats and 16 people packed into the standing room), and the entire system can move up to 8,000 people per hour in a single direction. No word on whether Singapore will tax the electric pods like they tax Teslas.

Singapore’s system will be similar to the one running in Abu Dhabi’s business park, but with newer and larger pod models.

In the announcement of the partnership, it’s mentioned that 2getthere will be moving toward mixed-use traffic with more research. Until then, the pods will be used for short distances on closed off roads.

“The automated vehicles will complement our existing multi-modal transport operations to bring about seamless connectivity for commuters,” Colin Lim, managing director of SMRT services, says in a public statement about the venture.

2getthere’s system is designed for simple transport connections as “a feeder system to a public transit node or a parking facility.” Think airport shuttles or theme park buses rather than subways or city buses. While the pods’ autonomous technology guides the pods on the same scheduled path trip after trip, they also have detection software in case anything gets in the way.

It’s not the type of autonomous system that will change the world, but it’s a start.

More like this
Innovation
19 hours ago
“Quantum materials” could give the human brain a run for its money, scientists say
By Nathaniel Scharping
Innovation
8.9.2022 11:00 AM
This self-healing material could fix your dinged-up car in 30 minutes
By Molly Glick
Innovation
8.8.2022 10:00 AM
A wild new plane-train hybrid could whoosh you to your destination — if it can get off the ground
By Molly Glick
Share: