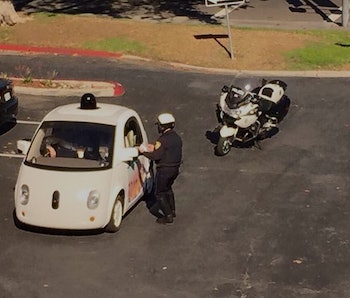 Last week, an officer of the Mountain View Police Department pulled over a vehicle for going too slowly. What he may not have realized, though, was that the car in question was an on-road prototype from Google’s Self-Driving Car project. And it was allowed to be driving slowly.

So it didn’t get a ticket, which means Google’s vehicles have still not been cited for traffic any violations. 💯.

The autonomous vehicles, Google says, are capped at 25 miles per hour, so they “feel friendly and approachable.” Once the MVPD realized its error, it released a statement explaining the situation and, essentially, apologizing to Google:

“This afternoon a Mountain View Police Department traffic officer noticed traffic backing up behind a slow moving car traveling in the eastbound #3 lane on El Camino Real, near Rengstorff Ave. The car was traveling at 24 mph in a 35 mph zone. As the officer approached the slow moving car he realized it was a Google Autonomous Vehicle. The officer stopped the car and made contact with the operators to learn more about how the car was choosing speeds along certain roadways and to educate the operators about impeding traffic per 22400(a) of the California Vehicle Code. The Google self-driving cars operate under the Neighborhood Electric Vehicle Definition per 385.5 of the California Vehicle Code and can only be operated on roadways with speed limits at or under 35 mph. In this case, it was lawful for the car to be traveling on the street as El Camino Real is rated at 35 mph.

“The Mountain View Police Department meets regularly with Google to ensure that their vehicles operate safely in our community.”

“Driving too slowly? Bet humans don’t get pulled over for that too often.

“We’ve capped the speed of our prototype vehicles at 25mph for safety reasons. We want them to feel friendly and approachable, rather than zooming scarily through neighborhood streets.

“Like this officer, people sometimes flag us down when they want to know more about our project. After 1.2 million miles of autonomous driving (that’s the human equivalent of 90 years of driving experience), we’re proud to say we’ve never been ticketed”

As noted in Google’s October report on the project, the vehicles have traveled a very long way — 1,268,108 miles as of October 31 — without much incident. Even accidents are rare, and have only ever occurred because of a human’s error. The cars have yet to wreak their own havoc.

As there was no ticket involved, Google’s clean sheet on the road continues. The near-incident, thus, is comical more than anything. A car was going strangely slowly, yes, but it was, presumably, still driving well and safely. We’re so impatient on the road, that it looks like we’re willing to penalize someone — an automated driver — for taking its time.