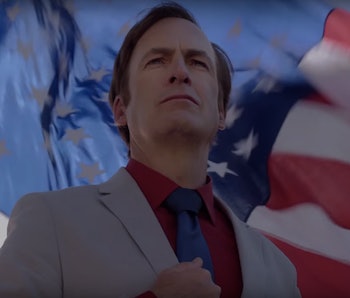 Leave it to Better Call Saul to eke out some tension in a scene that features two guys just basically sitting around and talking at a hospital bedside. That tension was built in to the opening flashback scene in the season finale, entitled “Klick,” — which interrupted the stinging cliffhanger from last week’s “Nailed.” Chuck (Michael McKean), the academic do-gooder brother meticulously traced each and every step Jimmy (Bob Odenkirk) had taken to sabotage HHM’s claim to Mesa Verde, the lucrative client courted by Kim before she left to start her own practice alongside Jimmy, but not before Jimmy had bribed his way into covering his own steps. Jimmy’s thoroughness ended in him witnessing Chuck have a panic attack from his electromagnetic sensitivity, fainting, and hitting his head, basically left for dead. It was a disquieting penultimate moment that lead to a low-key, but powerful season finale.

But more on that flashback: here is the perfect example of the show distilling its themes into a simple back and forth, or a narrative up and down. The McGill brothers holding vigil in a Chicago hospital over their dying mother gives way to Jimmy’s restlessness, forcing him to step out to grab a roast beef sandwich against Chuck’s wishes. Sure enough, Mama McGill soon flatlines, but not before calling out to Jimmy with her final breath. A bit heavy-handed? Yes, but does it adequately portray the deep-seeded jealousy that Chuck feels towards his brother for being both his father and mother’s favorite despite Chuck’s own persona success? Double yes. Add on some jealousy points for Chuck telling Jimmy she didn’t utter a word before she died.

Elsewhere we catch up with Mike, with his target in his sniper rifle sight hidden in the hills beside a Salamanca desert hideout. It’s another tense scene. This time, its played out in near silence as Mike gracefully pulls his rifle scope from side to side, watching the Salamanca family whack the driver from the Regalo Helado truck that Mike hijacked last week, deciding whether to end Tio for threatening his family. Instead, Nacho complicates things by becoming an unwitting human shield, standing in front of the criminal boss, forcing Mike to hesitate and not take the shot. His blaring car horn in the background causing his retreat and the unsigned “don’t” letter left on the windshield is its own frustrating cliffhanger. Did Nacho catch a glimpse of Mike’s station wagon and warn him, or is this some kind of play by an unseen force of nature named Gus Fring? We’ll have to wait until season 3 to find out.

Like Mike’s decision to stand down, “Klick” never carries out some kind of shocking season-ending moment. Maybe audiences have just come to expect that sort of thing, but Better Call Saul was wise to create its gut-wrenching moments in more subtle ways.

This season has been inevitably building towards a moment when Chuck would let his honor and ethical imperative go to stoop to Slippin’ Jimmy’s level. He has to become the villain. Chuck is a McGill, which means he’s capable of being a master manipulator if he shut off the moral side of his brain and awakened the con-man side. It’s a decision that recalls the flashback from “Inflatable,” when the anonymous grifter tells a young Jimmy, “There are wolves and sheep in this world, kid. Figure out which one you’re gonna be.”

We learn Chuck will be just fine after his copy shop tumble, but not before he sinks into a temporary but self-induced electromagnetic sensitivity coma brought on by constant medical care and a dreaded EKG. Jimmy is quick to be at his brother’s bedside, mostly because he doesn’t want a repeat of his mother but also because he truly loves Chuck. That familial connection — the only one he has left, really — will be Jimmy’s downfall. After Chuck wakes up, and after he realizes the professional personal embarrassment Jimmy has put him through, Chuck realizes he must become a wolf.

Better Call Saul’s general concern is Jimmy’s transformation into Saul Goodman, but to get there involves Chuck having some sort of self-actualization. He uses his own illness and Jimmy’s vulnerability to it, to get Jimmy to spill everything about Mesa Verde. Chuck tenders a fake resignation to HHM, which makes Jimmy come calling at his darkened lair only to find Chuck allegedly slipping more and more into a psychosis after lining the entire living room with mylar blankets.

Chuck is supposedly at rock bottom, causing Jimmy to admit everything. He did it all for Kim (a strangely absent Rhea Seehorn) because she deserved the big account, but he won’t let his relationship with his brother slip away because of it. Jimmy’s ultimate moment of clarity is also Chuck’s ultimate moment of deception. He’d been recording the entire conversation, and now Jimmy has unwittingly confessed to a felony that could get his disbarred or worse. “I find victory laps very comforting,” Chuck told Howard in “Nailed,” and we didn’t know how right that statement was.

“Klick” was filled with a lot of place-setting, and yet it marked a turning point for every single one of the show’s main characters. Mike isn’t the cold blooded killer yet, but he will be; Chuck has become the main antagonist and everyone will find out soon enough; Kim has been Jimmy’s loyal companion, but that can’t last; and Jimmy has been the ultimate con man, and that all has to come crashing down. Better Call Saul has built itself around seeing how the smallest action or inaction can cause the biggest reactions and repercussions. The fallout from those actions or inactions are coming. Bring on season 3.