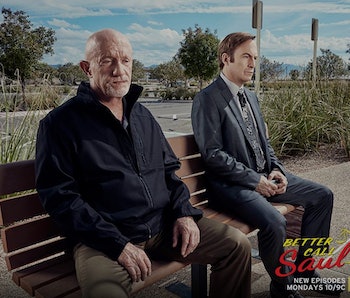 Spin-offs are a tough sell, especially when they aren’t merely the continued adventures of a particularly well-loved character from a previous TV show. Better Call Saul wouldn’t exist if audiences didn’t admire the off-kilter tenacity of Breaking Bad’s Saul Goodman (aka Jimmy McGill) and Mike Ehrmantraut. But the show has the disadvantage of being a prolonged television prequel that has to spell out season-long story arcs about how these characters get to where they were when we first met them in the previous show. Granted, audiences who didn’t tune in to the original show can follow the drama of the spin-off and be none the wiser; but people aware of the overall narrative find that, more often than not, origin stories are boring and predictable. But last night’s episode “Gloves Off” proved that the storytellers behind Better Call Saul are far too clever to let the audience believe there’s an advantage to already knowing how the story ends.

Last week’s episode ended on two cliffhanger doozies. And while Jimmy’s little commercial gamble continues his own downfall one hamfisted idea at a time, it was Mike’s decision (or indecision) to go through with Nacho’s plan to assassinate Tuco in this episode that confirmed things: Better Call Saul is a spinoff done right.

At frame one, we’re hooked. In silhouette, Mike lumbers through his front door. His hulking outline moves slowly through a cheap and sparsely furnished southwestern house before dropping an envelope filled with cash that spills out all over his dining room table. He heads to the freezer, and with a groan, he lifts a bag of frozen vegetables to his face and collapses into his couch. The uncovered side of his face grimaces, and as he slowly removes the bag, it reveals his face battered and bruised — nearly destroyed. The picture cuts to black.

The show toys with our expectations almost to a sadistic extent, immediately letting us anticipate how such a thing could happen to Mike with the knowledge that it must have come from a confrontation gone wrong with Tuco. It seems like stronger than just reverse dramatic irony. The episode’s introduction and the subsequent drama with Mike is a mini-master class in sustained tension. We know Mike gets out alive, but we also know Nacho isn’t in Breaking Bad, and Tuco is. What could have possibly happened at the end of the episode to make Mike’s face look even more like a lumpy swollen potato?

The tightly structured and well-written episode makes you want to find out so much that it sort of makes you forget about Jimmy.

The particularly interesting part in “Gloves Off” isn’t Mike’s Rube Golbderg plan to land Tuco in jail, but why Mike didn’t take the fifty grand Nacho offered him to just kill Tuco with one shot. The scene where Mike meets Lawson (the arms dealer who sold Walt his handgun in Breaking Bad) carries a heavy implication that Mike was a sniper in Vietnam — after he gives a briefly bittersweet and nostalgic speech about the difference between wood and fiberglass gunstocks during jungle warfare. Keep in mind Mike is an all-purpose killer in Breaking Bad, the type of ruthlessly removed bad guy who doesn’����������������������t think twice about taking lives because he’s so used to it.

Maybe the episode where Mike flees Philadelphia for New Mexico after getting revenge on the officer who killed his son was the beginning of his downward spiral. But maybe this time we simply witnessed a moment of waning goodness in him. The types of roles at play here are fascinating.

Thematically the episode is all about a particularly skewed sense of gaining or losing valor. Jimmy’s descent is subtler, and more gradual. “Don’t act like you don’t see the problem here,” a Davis & Main partner tells Jimmy after scolding him about his unsanctioned ad, “I don’t,” he replies, and he actually means it. It’s a particularly genius thesis statement for the show’s title character. But Mike is a good bad-guy, someone who has something to live for (his granddaughter Kaylee) other than himself. Are these men courageous or stupid or kind of a mix of both?

A few weeks ago we compared Better Call Saul to a semi-sprawling Pynchon novel, with a collection of separate characters with their own storylines, the foregone conclusion being that at some point those disparate paths will meet. The anticipation for that to happen should be killing the audience watching each week, but the show is handling the separate parts so well you don’t even worry about that. There’s no reason to worry about the viability of Better Call Saul, especially if each remaining episode is as much of a glorious punch to the face as this one.