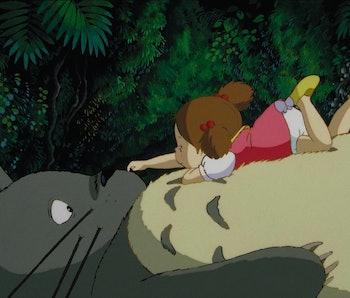 We’ve always known that Miyazaki films, despite mainly being movies for children, are spectacularly wonderful creations enjoyable for people of all ages. There has always been a layered complexity to the narrative and art that bellies more than the surface plot, but – and this is the same with anything with a large fan base – fans have delved into the stories even more than the typical viewer, and some have uncovered a few theories on the magical movies which cast them in a darker light. Here are four creepy and disturbing theories that Ghibli aficionados have uncovered.

To better blend in with her tribe, Princess Mononoke’s San wears a large cape of white fur that cascades down almost to the ground. This fan theory poses an interesting question: where did that cape come from? There aren’t that many animals in the animated forest who have that color fur. Really, there is only one animal that we see that has that color.

When speaking with Ashitaka, Moro the wolf god relates the story of how she adopted San. She says that San’s parents were defiling her forest and when Moro attacked them for doing so, they attempted to sacrifice San in their place. They run away and leave San with Moro who then takes her in. Fans wondered what it was that San’s parents were doing in the forest that would cause Moro to attack them, especially with a baby in tow.

They killed one of Moro’s cubs, that’s what, whether specifically to hunt it or to protect themselves, and Moro gives the fur of that child to San when she adopts her, wholly embracing her into tthe clan with that hide. This would give chills more than it would warm me at night, but San might not even know. She’s better off.

Totoro is a God of Death

The basics of this popular fan theory come from the climax where little Mei goes missing and the townspeople find what appears to be her shoe in the river. Her sister Satsuki eases their fears when she says that it isn’t hers, but what if it actually was? Theorists wonder whether Mei actually did drown in the river and her sister was in denial. Satsuki frantically tries to find Totoro in order to reunite with her sister, but in doing so she sacrifices her life to meet with Mei in the afterlife instead of hitching a ride across town.

When hopping onto the bus, some noticed the destination roster rolling along the cat-bus’s front and saw a peculiar destination called “grave road” flip by. Some believe the cat-bus to be something close to the ferryman in Greek mythology. When the two finally arrive at the hospital their mother is at, they don’t actually go inside to see her, merely looking in from afar, and when we zoom inside the room where the parents are talking, only Satsuki’s mother briefly notices the girls outside. The father does not, but only the mother is sick, implying that she is close to death herself since only she is able to see the girls sitting up in the tree outside.

What really gets fans going about this theory, though, is the apparent relation to the Sayama Incident of 1963, a criminal case about a 16-year old girl that was kidnapped, raped, and then killed. Her older sister, distraught after the death, committed suicide. Many are paralleling the sisters from 1963 to Satsuki and Mei, if Totoro actually is a god of death. Other evidence fans dig up is the sister’s names, Satsuki meaning “May” and Mei phonetically sounding like the month that the tragedy happened. There is also an instance of the city Sayama showing up on a label of tea in the film.

As much as people are enthused about the theory, Studio Ghibli has denied that Totoro is a God of Death and reassured everywhere that Mei is actually alive.

This is another popular and wicked theory, but this time it relates more to the environment than it does Miyazaki’s creatures. Chihiro stumbles into the world of spirits and magic in this Oscar Award Winning feature, and finds herself working in a bathhouse. Fans have theorized online that the bathhouse is also a brothel.

During the Edo Period (1603-1867), there were a number of communal bathhouses that employed women to clean and scrub the patrons while they bathed, and this was innocent enough on the surface, but after hours, those same women would charge for additional services. These women were known as yuna, which translates to “hot water woman.” In the movie, the women of the bathhouse are referred to as yuna, and the women usually in control of these bathhouses were called yubaba, the name of our fearsome witch with a Circe complex.

Also, Chihiro, once in the service of Yubaba, changes her name to Sen. This is usually a common practice for prostitutes to changes names.

There is also No-Face that is said to represent a patron attempting to coerce Sen with money to attend to him personally. He is constantly trying to give Sen anything she wants: tokens, gold, and food.

This theory is also not one that Studio Ghibli or Miyazaki have admitted to, despite a now-missing French interview in Premiere Magazine of 2001 that supposedly has Miyazaki likening some parts of the movie to the growing sex industry in Japan, but since Miyazaki has never said anything similar since then, the quotes may have been taken out of context.

This theory was actually confirmed by Hayao Miyazaki himself ,at the International Symposium of Leprosy in Tokyo just days before World Leprosy Day, which is on January 31st. Before that, though, the theory was mainly popular in Japan because of the original wording in the script. Instead of using the word “leprosy,” the characters say gyobyo which means both “incurable disease” as well as “suffering the consequences.”

The latter of the two meanings could relate to the stigma that is associated with leprosy, then and now, but another explanation for that phrase could be the Buddhist belief that leprosy was a karmic disease, which means that quite a few people thought that if you had leprosy, you had done something wrong to deserve it.

In the film, many people within Iron Town are swathed in bandages, and one citizen in particular tells Ashitaka that Eboshi was one of the only people to take them in when they had nowhere else to go. This also implies that they were discriminated against due to the gyobyo.

And all of this deliberation by fans was fruitful because Miyazaki confesses to “want[ing] to portray people who were living with what was said to be an incurable disease caused by bad karma” after visiting the National Hansen’s Disease Sanatorium near his home and being shocked by what he saw.