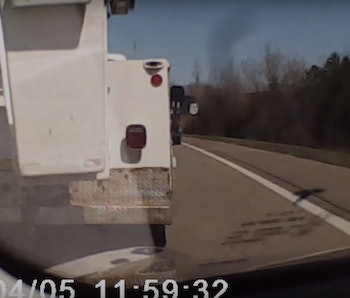 Elon Musk on Sunday night shared an impressive video of a Tesla Model S avoiding being side-swiped on the interstate. It’s a brief video but shows how the Tesla’s autopilot feature can quickly react to danger on the road and maneuver to avoid an accident.

Driver Joshua Brown was driving his Model S, nicknamed “Tessy,” in suburban Cleveland on April 5 when a boom truck swerved into his lane. Autopilot alerted Brown to take back control of the wheel. (Had he not, the car “would have turn on the hazards, slowed down, then come to a stop and put it in park. It told me to take over as soon as it sensed the collision,” he writes.)

Here’s how Brown describes the incident:

Tesla Model S autopilot saved the car autonomously from a side collision from a boom lift truck. I was driving down the interstate and you can see the boom lift truck in question on the left side of the screen on a joining interstate road. Once the roads merged, the truck tried to get to the exit ramp on the right and never saw my Tesla. I actually wasn’t watching that direction and Tessy (the name of my car) was on duty with autopilot engaged. I became aware of the danger when Tessy alerted me with the “immediately take over” warning chime and the car swerving to the right to avoid the side collision.

You can see where I took over when there’s a little bit of blip in the steering. Tessy had already moved to the right to avoid the collision. I was not able to slow down even more due to the heavy traffic (cars were behind me). Once I got behind him I slowly added more room between us until he exited. I was not tail gating after the incident.

It was a mistake on the other driver’s part. He did not even know I was there until I honked my horn. There was a group of women in the black sedan to my left and they went nuts about the guy and what he did (all kinds of gesturing in their car). Once I was beside the truck as it slowed down on the ramp, the guy gestured a “sorry!” I gave him, “it’s okay” wave.

Tessy did great. I have done a lot of testing with the sensors in the car and the software capabilities. I have always been impressed with the car, but I had not tested the car’s side collision avoidance. I am VERY impressed. Excellent job Elon!

Note: I have over 39,000 miles on the car and I’ve had it since mid-July 2015. Hands down the best car I have ever owned and use it to its full extent. It has done many, many amazing things, but this was one of the more interesting things caught on the dashcam. Note: it’s a really poor dashcam, so sorry for the poor video quality.

(Oh, and the audio story that’s playing in Brown’s Tesla is “Something Borrowed” by Malcolm Gladwell, published in The New Yorker in 2004.)

This is only the most recent attention-grabbing example of how Tesla’s Autopilot software has been used to avoid collisions. According to Tesla, it offers “[d]igital control of motors, brakes, and steering helps avoid collisions from the front and sides, and prevents the car from wandering off the road” and will only improve as Tesla sends out software updates. In October, there was this dash cam video of Autopilot avoiding a 45 mph crash.

While Autopilot may scare your grandmother, it may also help her avoid a wrecked Models S (starting price: $70,000).