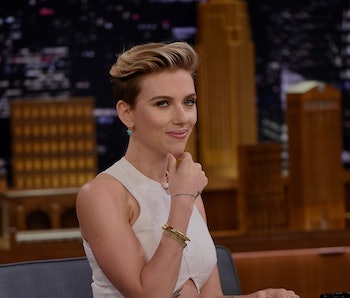 Paramount is in hot water after yesterday’s outcry from the studio’s first look at Scarlett Johansson as Major Matoko Kusanagi in the live-action remake of the sci-fi anime Ghost in the Shell. So this new development from ScreenCrush won’t do them any favors.

According to various sources close to production and a confirmed quote from Paramount, ScreenCrush is reporting the studio and DreamWorks sought help from Lola VFX — a leading CGI studio known for making Brad Pitt old as hell in The Curious Case of Benjamin Button — to alter Johansson’s physical features to make her look Asian. Take that in for a second: A Hollywood studio tried to make a white actress Asian. With CGI.

Instead of digital yellowface, I wonder if it ever occurred to the filmmakers to try, I don’t know, casting an Asian actress?

A test was done related to a specific scene for a background actor which was ultimately discarded. Absolutely no visual effects tests were conducted on Scarlett’s character and we have no future plans to do so.

ScreenCrush adds that some anonymous sources said the touch-ups were for Johansson exclusively and that it was done without her involvement or knowledge. I don’t condone pitchfork-carrying of any kind, but if you’re the type maybe don’t aim at Johansson. Instead, channel it at the ludicrous decision-making that enables and excuses borderline racist practices in the modern age.

Digitally altering the human face is a relatively new trend. Similar technology was used recently to turn the clock back on Pee-Wee Herman in Pee-Wee’s Big Holiday on Netflix. But the market forces that drove this ridiculous outcome have been around for a long time. At first for mockery, but now it’s meta-textual art or some bullshit. It may be 2016, but some things never change.