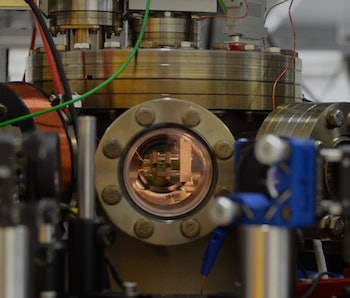 Physicists have developed an engine that you can’t see with the naked eye.

In a paper published today in the journal Science, the research team from the University of Mainz and University of Kassel in Germany created an electromagnetic system that traps a single charged Calcium-40 atom and oscillates it, creating energy just like steam-locomotive and car engines. And because of the quantum mechanical condition of this tiny engine, the physicists believe that the system works at the same level and can even be more efficient than the average car engine.

“There has been a lot of theoretical explanations and investigations in quantum properties of engines since the late ‘50s,” lead researcher and experimental physicist at the University of Mainz, Johannes Roßnagel tells Inverse. “We have now shown that it’s possible.”

Roßnagel and his team embarked on the project four years ago when they wanted to explore quantum effects in thermodynamics, and thought the best way to experiment would be to create an engine. They had to build everything from scratch on a small budget of a few hundred Euros, he says. They had to construct personalized electronics and a system that could control the ion at a very precise level. It took them an entire year just to develop the technique to obtain temperature measurements — common methods being too slow or inaccurate for their engine.

What they ended up with was an eight millimeter-long and four-millimeter-in-diameter ion trap with gold plates and electrodes that sequestered the lone calcium atom (but any charged atom could do the job) inside an electromagnetic field. Two lasers point at the ends of the trap, one heating up the atom and the other cooling it down. This fluctuation in temperature drives the ion to create an ever-increasing harmonic oscillation — like a sound wave. It’s the same idea as larger thermal engines that rely on the gas or liquids to generate mechanical work, except in this case there’s just one particle, Roßnagel explains.

“This was very surprising to us,” Roßnagel says. “This means that when you scale such a system down to a single particle, it’s still performing on the same level as macroscopic engines do.”

He and his colleagues believe this level of efficiency is due to quantum effects, unique properties that can only be generated through single atoms and particles. Roßnagel explains that thermodynamic quantum effects would make it so engines do not have to rely on temperature as a sole energy source, and that a single-atom engine’s quantum properties have the potential to generate even more power than a thermal engine. However, outside physicists are not so certain.

“I wouldn’t accept this efficiency is just from ‘the weirdness of quantum mechanics,’” Hartmut Häffner, a theoretical physicist at the University of California, Berkeley, who was not involved in the experiment, told Popular Mechanics in 2014 when Roßnagel wrote a proposal paper about the engine. Häffner adds that the potential single-atom engine itself “is very interesting and very well-described. It’s trying to push the boundaries of what we know about thermodynamics into a new regime.”

The single-atom engine Roßnagel and his team built is the smallest engine that he knows exists today. Yet, there is a possibility to create even smaller ones with a single electron, but he doesn’t believe there is any interest in pursuing one. “We have a single particle which is running in the engine, and whether this is a calcium atom or an electron, from our research point of view, it doesn’t make a difference.”

Next, Roßnagel wants to build tiny refrigerators with the technology. By turning the thermodynamic cycle around, the single-atom engine would run exactly like a refrigerator, he explains. They system generates a temperature difference, creating a side that is heated and a side that is cooled — like our food storage appliances. In the far future, he can also see these nanoscale engines improving chips and single atom transistors.

“The heat that’s produced during an operation is a very huge problem for [the chip industry]. I think to have additional cooling systems at hand would be very helpful,” he says.

Regardless of what exactly comes out of their initial single-atom engine, Roßnagel believes “this will find some greater applications some day.”