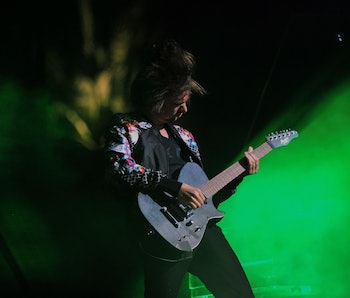 Muse’s third night of a four-night residency at London’s O2 Arena suffered a technical mishap when, during a song about drones — off the band’s latest album about drones — a drone crashed into the audience.

No one was hurt, reported NME, but things could have been much worse, because this was a big drone. Fans call it the “Dildrone” and it’s no DJI Phantom 4. The blimp-shaped craft is much larger and ominous looking, as it’s meant to represent a more pessimistic, privacy invading future for technology.

Dildrone was supposed to fly the entire circuit of the stadium but it only made it halfway before slowly descending on the fans.

Muse’s seventh album is titled Drones and the loose concept album sketches a picture of a woman struggling in a dystopian society governed by looming drones and robots.

The crash took place during a song called “The Globalist,” which lead singer Matt Bellamy has described to BBC Radio 1 as “basically a narrative within itself about the rise and fall of a dictator, the end of the world, World War Three and all the good stuff I like.”

The song is split into three parts and during the heaviest middle section — when the protagonist goes insane and destroys the world — is when the drone ironically (or appropriately) goes down. (This is why we need more regulation and air traffic control for drones.)

People in the audience recorded a lot of the low-light/strobe-light action on their phones.

This fan caught the action from up in the balcony, giving a good sense for the tail dive it took.

This fan was practically underneath the drone as it came down.

Perhaps the stunt was all just a part of the show.

A similar event involving a floating orb of sorts, also descended on the crowd during the band’s show in Detroit earlier this year.