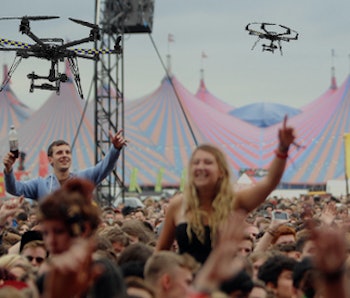 The Federal Aviation Administration wants to limit the number of innocent bystanders wounded when you crash your new drone.

New suggestions announced on Friday fly these ideas: As long as your drone weighs in the range of four to five pounds, and you keep it 20 feet above people’s heads, or ten feet laterally away from them, and “not operate so close to people as to create an undue hazard to those people,” drone operators are in the clear.

If you’re thinking of getting a drone or have one already, here’s what to know:

Drones under 250g (about 0.55 lbs) are free of restrictions under the proposed FAA guidelines. While still considerably heavier than the world’s heaviest insect, these lightweight drones are not expected to pose much danger to crowds. While few drones in this class do anything more than fly, a few do have cameras.

The FAA free-for-all may be a boon, as those worried about the new restrictions may simply opt for lighter. But the relatively liberal policies for lightweight drones may mitigate the appeal. The bantamweight class benefits from affordability and mass production. Expect the micro-drone swarm to become a more common appearance. At festivals or big events, these little guys could put on quite a light show, and if we lose one or two in collisions, what’s half a pound to the dome?

The most common commercial drones — those between four and five pounds — make out pretty well under the proposed rules. Of course, the operator will still have to comply with local ordinances, but the green light from the FAA clears the way for a host of new possibilities. For some perspective, the new DJI Phantom 4 drone that people are rightfully drooling over weighs about three pounds.

Journalists can now more easily use drones to obtain footage of major rallies and protests.

And the favored festival drone will now become even more ubiquitous, if somewhat smaller on average.

The third and fourth tiers of drones don’t actually distinguish in weight. The FAA assumes that any drone over the middleweight classification poses a “serious” threat of injury. The difference between Categories 3 and 4 regard the amount of pre-screening an operator has to undergo before launching the heavy drone.

Category 3 drones are not permitted to fly over crowds but may fly over small groups of people if the operator is a certified drone pilot, and the overpass is fleeting. The classification appears designed for certain commercial drone uses including building and crane inspection, in which there may be people beneath the drone but not a massive crowd. These industries offer substantial possibilities for drone expansion, and onerous government regulation could significantly stymy their adoption.

Category 4 allows for heavy drones to fly over crowds but requires operators to develop “risk mitigation plans” to help prevent serious injury to the people below. The guidelines aim to balance security concerns while preserving “the social acceptance of operating a UAS over large gatherings or events.”

These drones may weigh up to 55 pounds, offering a ton of space for improvement to current models. The restrictions may slow the rapid employment of the heavier drone models, but on the whole, the new guidelines seem remarkably fair. It’s these drones that shoot the best performance video and have the most room for improvement. No word yet on how the FAA feels about drones dropping parachuting beers over crowds at festivals.

The draft regulations divide drones into four classes and establishes different restrictions for each. Since testing is ongoing on the potential danger posed by the heavier drones, the guidelines remain subject to change. There will also be a public comment period to give you the opportunity to complain.

More like this
Innovation
Sep. 21, 2022
Look: Drones could be the future of 3D-printed architecture
By Jennifer Walter
Innovation
4 hours ago
Audio deepfakes are a major threat — here’s how researchers expose them
By Logan Blue, Patrick Traynor and The Conversation
Innovation
Sep. 22, 2022
Trash can-sized robots could revolutionize how you travel — but there's a catch
By Molly Glick
Share: