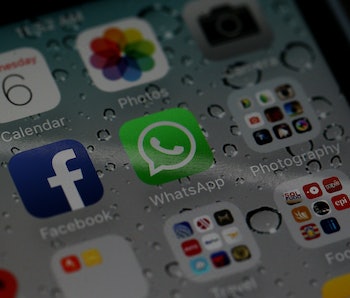 Few things make people instantly angry like someone texting at the movie theater. You’re put in a dark room with an enormous screen, thrust into the cinematic universe of your choice, and then some asshole decides to light up his smartphone in the front row and ruin the whole thing.

Alamo Drafthouse straight up boots people for using their phones, and every cinema is littered with “Please Silence Your Phones” propaganda, but it still happens.

Theaters have been looking into a “texting friendly” movie experience for years but AMC Entertainment CEO Adam Aron brought the whole thing back up again in an interview with Variety on Wednesday. Aron gave perhaps the most old-man explanation for why he wanted to draw in those pesky millennials with smartphone-friendly theaters.

Despite the fact that there are plenty of 22-year-olds more than willing to shut down their phone for two hours, Aron said he was considering the possibility of having specific texting-friendly auditoriums.

Here me out: this could be great. Yes, texting is annoying, but it’s a rare person who can say they’ve never done the old “pocket peek and text down by your leg” method while waiting for an important message. Text-friendly movie theaters could give people who still need to be available (doctors on call, overworked news editors, police officers), the chance to enjoy a film without worrying that needing to check messages would get in the way.

Text-friendly theaters aren’t going to be popular with many moviegoers, which could mean they sell tickets at a lower price. It won’t be ideal, but they may be the difference between a sold out film normally and a few seats open in a slightly less optimal experience. This is assuming that the theaters draw the line on sound — nobody wants people having full phone conversations in the middle of the film.