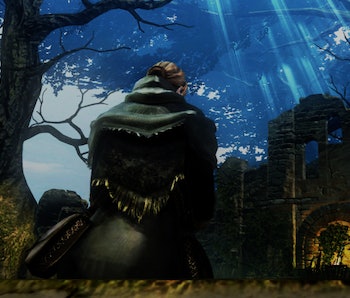 Dark Souls loves a specific type of woman. This woman is demure, somber, and a little strange. They typically hold great narrative relevance, but they hide their importance behind a veil of reticent, delicate femininity. They rarely speak, and when they do, it’s in soft tones. They appear in each of the games developed by FromSoftware, and are generally interchangeable.

What’s interesting about this character type is that her template is nothing new. Silent, alien women have existed for a long time, mostly in anime, which is why they stand out so markedly in Dark Souls. In a game full of western myths and symbolism, there are these characters with strong roots in Japanese pop-culture, and seem to be the strongest concession made by the game’s venerable Japanese developer to break with Dark Souls’s dark, European aesthetic. The chief question is why?

In Demon’s Souls, it is the Maiden in Black; in Dark Souls II, we meet the Emerald Herald. The Doll in Bloodborne matches the type, and the Fire Keeper in Dark Souls III does too. In each of these games, a female guide of sorts politely supports the hero in his journey to vanquish the ultimate villain. These characters are typically fan favorites and the game actually requires you, as the player, to become dependent on these characters. They are the only source of strength in a game which requires the player to be as strong as he can be. The relationship this fosters, along with the feel-good construction of these women, creates a scenario in which one can’t help but form dependent connections on the female presence.

I’m not looking to deem whether FromSoftware’s representations of women are good or bad. I’m trying to decode why FromSoftware insists on repeatedly re-creating essentially the same character over and over again. In the Dark Souls games, these women are always saving the world, but never actively. They save the world by helping the player vanquish the next enemy or boss. They’re heroes through servitude.

It’s not that FromSoftware relegates all prominent female characters to supporting roles. The player’s own gender never changes the narrative or interactions with any of the other characters. There are also a variety of characters, both male and female, throughout the Souls game who either follow fantasy archetypes — or subvert them. But when it comes to this one specific type of character, the traits remain static between games. Only when we begin to parse out the sort of idealized standards of a powerful female character do we see some clear demarcations. We can see, then, where the western influences end and Japanese influences on Dark Souls begin.

These female characters are strongly rooted in a Japanese archetype found typically in anime. The emotionally quieted woman who obediently serves the hero as valuable support is identifiable in shows like Neon Genesis Evangelion, The Big O, and Sailor Moon.

While no way exclusive to Japanese anime, this sort of archetype is one of the most popular types of characters in the medium. Stranger still is that these characters are actively fetishized for their outer-worldliness. Their lack of a broad emotional spectrum are part of their appeal. Additionally, these characters are typically more resilient than everyone else in their story — perhaps, because they are unburdened by emotions. Yet one could also argue that their lack of “emotions”, used here as an unfortunate euphemism for men’s conception of female shortcomings, makes it easier to believe they are capable of such great strengths.

So, why would Dark Souls, a game that made strides forward in depictions of protagonist gender, keep using a dated anime archetype? One argument is satisfying the preference of both developers and the game’s audience. These characters are, after all, incredibly popular in the fandom.

However, if the answer was simply that they “liked” these types of characters, then why would they subvert themselves? The most powerful enemies, and in some cases the final bosses also embody the same characteristics as these female characters.

In Dark Souls II the true mastermind turns out to be the Queen of the land in which the game takes place. She kills her husband to usurp his throne. She is pictured using the same visual language to illustrate the female guide characters, with all her regal manners and demure personality. However, once engaged in combat, she reveals her true, monstrous form.

While the idea of a manipulative enchantress who brings about the destruction of a powerful kingdom is reminiscent of Morgan le Fay from Arthurian legend, she is an admission that these sort of characters shouldn’t be expected to be quiet and emotionless. The Queen suggests that beneath the surface of Dark Souls femininity lies an identity that is not seen, behind an emotionless facade.

It’s curious to find a developer who is willing to create a game so unique to their vision that they’ll forgo the security of player comfort. FromSoftware creates brutally difficult games — in which many players have a hard time even enjoying their titles. Even more, they create obtuse stories and narratives that are difficult to piece together or navigate. But through it all is one element that feels dully repetitive, and that is their alien female characters.