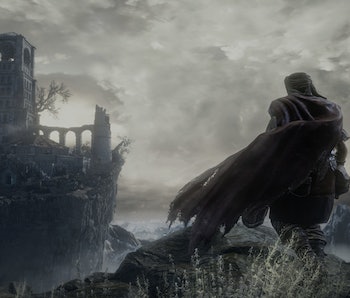 Throughout the entire Dark Souls franchise lore has been a pillar of each game, ingrained in the world around the player through dialogue, objects and item descriptions. The mythology of the series is an intricate puzzle that helps contribute to the value of each moment you spend within the game – which is why we decided to lay out the foundation a few weeks ago. (If you haven’t read it yet, we recommend you do before continuing on here).

But the bigger, more important question is how does the story of Dark Souls 3 fit into the grand scheme of things?

From the very beginning, Dark Souls has always been about a battle between the light and the dark in a series of cycles. Throughout each cycle, the First Flame was kept alive in order to keep the Age of Fire present and prevent the Age of Darkness from coming to fruition. Two such cycles took place in both Dark Souls and Dark Souls 2, where the player became the champion to usher in the Age of Darkness or keep the Age of Fire alive – but no matter which players decided to pursue their choice appeared to have little effect on the next game in the franchise begging the question if the cycle is just doomed to repeat.

Like the two games before it, Dark Souls 3 takes place in the same world and revolves around the cycle of light and dark once more. This time around players control a champion referred to as the ‘Unkindled Ash’ who is tasked with finding and returning four Lords of Cinder to their thrones at the Firelink Shrine in order to link the First Flame once again.

While these Lords of Cinder haven’t been mentioned before, it’s fair to assume that they have some relation to Lord Gwyn who was the first to link the flame when it started to originally die at the beginning of the Dark Souls universe. While we don’t know if they are directly connected, it’s entirely possible that they may have been servants of Lord Gwyn who perished when he linked the First Flame and now may be the only hope of keeping the cycle alive.

Now, we don’t know exactly what age Dark Souls 3 takes place in or what point in the cycle that age is at – although it’s safe to assume that based on the reveal trailers opening words, “And now only embers remain”, that we are nearing the end of the present cycle within the game.

Since Dark Souls 3 is set to be the last installment of the franchise, it’s easy project that the game will present us with a way to end the cycle and usher in the Age of Darkness, rekindle the First Flame and keep the Age of Fire alive, or walk away and find another alternative all-together. Unlike the other games however, I’m personally hoping for a more permanent and established ending this time around since the game is set to be the last in the franchise.

Here’s to hoping for plenty of lore to study up on and a satisfying close to the cycle.