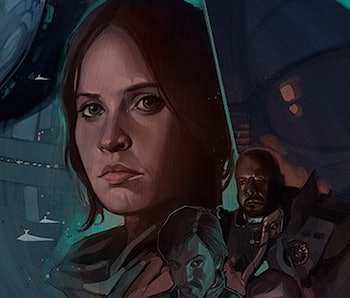 Phil Noto sees the Star Wars galaxy in muted colors. The neons are softer, the skies are grayer, and the universe is a pastel watercolor. You can see it on his work on the Chewbacca mini-series, or perhaps in the recently launched Poe Dameron comic series. And since Marvel probably won’t stop putting out Star Wars comics anytime soon, perhaps putting Noto on the eventual Rogue One comic book isn’t too big a request.

Because look at this:

His talent for capturing the Star Wars universe in a different light is already apparent in his current Star Wars works. Chewbacca is depicted as a soft teddy bear, but his strength and size are still on display. He’s basically the giant teddy bear we always knew and love.

There’s actually a lot to love about the Chewbacca miniseries if you haven’t already read it. Chewbacca, stranded on a planet with a busted ship, agrees to help out a young girl named Zarro whose debt-ridden father is forced into labor. Clearly not a stranger to tough female heroines, Chewbacca also populates its story with space gangsters and and Empire soldiers. It’s actually the nighttime scenes in Chewbacca that really showcase the galaxy in ways not typically seen. While Star Wars is no stranger to black settings, they are usually in the context of indoors. The naturalistic sky of Noto’s work help extenuate how unique a vision he has for this universe.

We know that Marvel is already planning a Rogue One prequel comic, so maybe we should consider this an unofficial request for Noto to get in on the Rogue One train. Look at how beautifully those characters come out in his Rouge One image that he shared on Twitter. The muted palette really brings out the dramatic tone as witnessed in the recent trailer. Really, if it ain’t broke, keep Noto on doing more Star Wars, that’s how the old adage goes anyways.