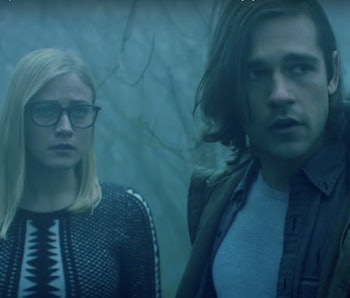 It all led up to this — or did it? The finale of season one of The Magicians was a confusing mess, but overall, the show never stopped experimenting and taking risks. The season ended on such a bonkers cliffhanger that it all but corrected the finale’s faults.

Part of the appeal of the show — over the course of its first twelve episodes — was that it constantly reinvented itself. Just as viewers thought they could predict where it was going, what it was doing, and how it told its story, The Magicians shifted its shape. Just watch “The World in the Walls,” “The Mayakovsky Circumstance,” and “Impractical Applications” for evidence. You have to admire a show that even in its first season finale completely rebrands itself while trying to set up its already announced second season, and pay off what it promised at the end of its premiere thirteen weeks ago. In “Have You Brought Me Little Cakes,” Quentin Coldwater (Jason Ralph) and the Brakebills crew finally came face to face with the Beast again, but not before a million other things happen.

In the penultimate episode, we were left with Quentin and Julia (Stella Maeve) finally making it to the magical childhood realm of Fillory via some hastily explained time travel magic. When they show up there in the 1940s, it’s still the vibrant Garden of Eden-esque place where the Chatwin kids are alive and well. Quentin and Julia get right down to creating a magical dagger that can eventually kill the Beast.

Meanwhile, 70 years in the future, Alice (Olivia Taylor Dudley), Penny (Arjun Gupta), Margo (Summer Bishil), Eliot (Hale Appleman), and Josh (Trevor Einhorn) are fresh from jumping through the Neitherlands fountain into a whole different Fillory. “Welcome to Fillory 2016,” Quentin sarcastically intones in the episode’s prominently-used voiceover, matched with images of a desolate and gloomy Fillory overrun by the Beast’s evil influence. Think of it like a magical version of present day Detroit.

From that basic setup, only a bullet pointed list of plot developments could do the episode justice:

Phew, that was a lot. And a lot of it was pretty weird. It’s as if every time you had the opportunity to ask yourself “What were they talking about again?” it was thrown into one episode and wrapped up succinctly almost to the point of being frivolous. The episode could easily be a masterclass in compacting three episodes worth of plot into 45 minutes, but that isn’t necessarily a good thing. The showrunners could have and should have stretched everything that happened in the finale backwards into the preceding episodes a bit to make sure things weren’t as rushed as they seemed here.

But, to be fair, it sure as hell was a crazy ride. The fact that the episode stayed so steady in rambling off plot progression also makes it one of the most breakneck episodes of TV you’ll see, which is capped off by the the absolutely crazy final scene.

A second season has already been announced, and it’s like the showrunners just wanted to keep toying with that idea in the audience’s mind. The Beast (aka Martin Chatwin) finally gets rid of his moth-ridden visage, and promptly murders or maims everyone (including a particularly brutal moment where he cuts both of Penny’s hands off), leading Julia to attack him. But before any Beast blood is shed, she offers him a cryptic deal, the two disappear, and Quentin (and the audience) is left squirming in the corner trying to figure out what happened. Cut to black, cue the audience flipping out, but hopefully wanting more.

The Magicians played tricks on the audience right up to the final credits, and that kind of narrative sleight of hand might make a few viewers mad because they didn’t get a neat and tidy resolution. But The Magicians has never been neat and tidy. It’s always been about characters with this supernatural ability finding out that it only makes them more human than anything. There’s been lots of ups and downs through the first season, and The Magicians has been many things. Mostly, it’s been magical.