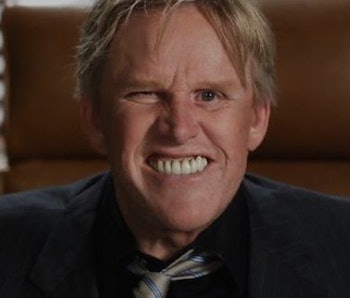 Freddy Got Fingered — a film that MTV-famous cutup Tom Green got carte blanche to write, direct, and star in — turns 15 next week. During the same year Freddy premiered, the Spike Jonze-produced Jackass and The Andy Dick Show dominated MTV, where Green had made a name with his own sketch show. In the next two years, Primetime Glick would become a short-lived staple on Comedy Central, and Crank Yankers would find unprecedented success. Insouciant, perverse, often prank-filled shows — made quickly and on the cheap — dominated television comedy.

In 2003, Comedy Central was still in the early stages of oddball original programming — after half a decade of being largely a forum for movies and sketch comedy show reruns — after South Park made its breakthrough in 1997. Many of the shows attempted by the cable channel in the first half of the 2000s are not easy to access today; even 2005’s Stella, which became a huge cult hit and launched major careers for its three stars, is not available on streaming services. Others, like Primetime Glick and Dave Attell’s barhopping travel show Insomniac exist only in abbreviated “best of” DVD compilations.

One can imagine that it would be even worse for shows of the time period that didn’t tie to particularly major stars. In an age when nostalgia for every walk of television and dated franchise pervades culture (either they are sold over to Netflix or Hulu, or rebooted by them) one of Comedy Central’s best shows — 2003’s 10-episode mockumentary marvel I’m With Busey — is particularly obscure. It is only accessible in the form of sub-VHS-quality YouTube rips assembled by a fan site and YouTube channel “Still With Busey.” The site’s creator, a Pittsburgh-based web designer named Travis Maynard, also helmed a petition to get the show released on DVD, and has conducted with interviews with the members of the generally reticent team behind the show who have agreed to talk to him.

I’m With Busey was originally the brainchild of standup and former The Man Show and Crank Yankers writer Adam de la Peña. The concept was simple, and very little formal “writing” was involved: de la Peña, a fan of Gary Busey’s (“In college on Fridays, we’d have Gary Busey Night,” he explains in the first episode), would shadow the Point Break and The Buddy Holly Story star to learn the ways of “being a man,” among other life tactics. In the pilot episode, de la Peña is driven to Busey’s Los Angeles home by his mom. The middle-aged actor then launches into pulling longswords on Adam, improvising songs while shaking rainsticks, and regaling Adam with deeper truths of (“All men are just failed women at birth”).

By all accounts, relatively nothing was planned for filming the season, and it’s easy to sense the wholly improvised quality of the dialogue. De la Peña provides a valuable, perpetually nervous foil, but the show’s main attraction is Busey. The actor is full of non-sequitur spiritualist life lessons (“You’re getting lost in your imaginatory vagueness”), often spelled out in elaborate acronyms called “Busey-isms,” and introduces Adam to new and strange “guru” figures who appear to be real-life associates. Episodes find Gary forcing Adam to cook roadkill, play unprotected paintball, sniff strangers to see if they are alien “replicants,” and to participate in a demolition derby. He explains the future of technology, and plays Adam’s Hitch during a blind date.

Looking back on the show today, Busey feels both ahead of its time, and yet deeply steeped in the comedic landscape of the early 2000s. Given the fact that Busey’s current eccentricity is regarded as being a side effect of a near-fatal 1989 motorcycle accident, it’s easy to imagine that the show wouldn’t be greenlit today, or at least that it would inspire some level of controversy. This was aroused when Busey was the focus of a Amazon Fire ad campaign in 2014 that some felt to be exploitative. However, Busey’s essential concept — oddball juxtapositional jokes involving a semi-obscure, unexpected celebrity — seems very much of the age of “Internet humor.”

With its farcical amplification of the idiosyncrasies of the real-life Busey (with him behind the wheel of most of it, mind you) and primitive production values, I’m With Busey could have been a ready fit for a Funny or Die web series. But it’s unlikely that any network today would take on such a niche show, unless it was taking its tonal cues from Louie or Curb Your Enthusiasm

But I’m With Busey seemed to take its cues from nothing except Gary. It was a odd parodic combination of the unhinged reality TV of the time (This was the heyday of The Osbournes) and Fear Factor-like “challenge” shows. It’s difficult to explain what works so well about the show on paper, because the appeal doesn’t stem from the larger concept, or even the primary plot points It’s all about the spontaneous details, and Busey’s expertise with pranks and shifting comedic gears in so many surprising ways. As de la Peña explained in a rare 2012 interview on The Adam Carolla Show, the actor’s ideas, inevitably, were “crazier” that anything the rest of the writers could think of, and always worked better.

I discussed the show’s particular appeal, its difficult genesis, and its far-too-meager legacy with Maynard, who today remains the Internet’s resident I’m With Busey champion and expert.

Can you tell me about your first experience with the show?

I actually grew up in West Virginia — in the area where all the bad stereotypes come from — where we didn’t have very many cable channels. But around the time I got into middle school or high school, everybody in our little community got all these extra channels and one of them was Comedy Central. A little bit after we got it I’m With Busey started… [Dave Attell’s] Insomniac was another one at the time. It was the strangest thing. It was one of those shows where there had to be some scripting going on but still everything was kind of ad libbed and very entertaining.

Were you a fan of Gary Busey before seeing the show?

I wasn’t a die-hard, but I had all heard the stories of his motorcycle accident, where he was brain damaged, and that was one of the reasons behind the way that he acted. I’m sure some of that’s true to an extent, but he was an actor and definitely playing it up on the show. If you read the Q&A with [director] Sam Seder on our website — he directed most of the episodes of the show — he says that most of the time Gary was coming up with stuff as they were shooting it.

Is he the only person from the show that you’ve been in contact with?

We’ve tried. I’ve spoken to Jim Biederman, the producer of the show, briefly by e-mail. He’s probably why the show exists. We were trying to get a Q&A set up with him and then we just kind of lost touch, or maybe he got cold feet. We’ve tried to contact Adam, but he’s surprisingly a very, very private person. He’s done some animated shows since Busey… I think the last one was My Dungeon, Your Dragon [a comedy show written within ]. I, personally, haven’t really looked into those too much but I know that some of these shows have a pretty huge fan base. The most we got out of Gary was he actually followed our Twitter account at one point. I would love to talk to Adam, because I feel like he would provide a lot of good insight to behind the scenes, whereas Gary would probably be a little more hard to talk to.

Do you have a sense of how these guys felt about the show after it was cancelled, or how they look back on it years later?

I think that it was a funny idea that they just tried, but when they started doing it, most of the people working on the show quickly became kind of miserable. Just to give you some backstory of how it came about, from my research: Adam used to work for The Man Show, and Gary was on an episode… I think that’s where [Adam] actually pitched the idea. [The Man Show co-creator and star] Adam Carolla was involved somehow and, with Jim Biederman, helped get people actually interested. Then they basically put Adam and Gary in front of the camera. Adam was probably starstruck at first. But once they got started… Sam mentions in the Q&A how the tension with everybody: between Adam and Gary, between everybody and the directors. You can imagine, just with Gary’s personality, how toxic it could have been.

I don’t know if they’re embarrassed of the show. That was probably my biggest concern going into talking to people about it, because they and Comedy Central have basically done everything they could to make sure that no one knows it exists. The fact that no one has not even attempted to take it down our channel shows that they don’t want any profit off it. For a while. we were attempting to get enough people interested to actually release a DVD.

There are definitely points in the show where you can tell that Adam is seriously upset.

Yes. I think probably the most real reaction was the roller derby, with the cars crashing into each other. That was the moment, I think, where Adam was like “Fuck this, I can’t deal with this guy.” Everything you hear about Adam and this show is 100% true. I think to this day he does not drive.

Have there been any shows since I’m With Busey have struck a similar nerve for you, or that you think are in that tradition?

I don’t know if you’ve heard of a Swedish show called High Chaparall, but the gist is they’ll do a show focusing on a washed-up celebrity. It’s very similar to I’m With Busey. The two comedians — Filip [Hammar] and Fredrik [Wikingsson] —met up with Gary for two episodes, and it was I’m With Busey 2, basically. They met with Gary at his house, and they even go and meet a “Magic Indian.” That guy, who is a Native American, is actually friends with Gary, and Gary looks up to him. He convinced him to actually dress up and be in this episode.

What is your favorite episode, or favorite moment, of the show?

The whole bit with Gary pulling out his knives is great. That happens in High Chaparall as well. I also loved the ending of I’m With Busey, with Andy Dick replacing Gary — making them split and reunite. They weren’t really sure that the show was cancelled at that point, they were just kind of making an ending in case they did. I think they all had an idea they were going to be just because everybody was so unhappy making the show. Also, the first episode is absolutely amazing — the first interaction — and the “Fear” episode.

In terms of people you’ve encountered, fans of the show, are there any notable people that you’ve met, or interesting reactions that you’ve gotten?

The people I meet online and talk about I’m With Busey — they’re just weird fans like me. Nothing really stands out. But honestly, [the site] is just something that’s fun for me to do. I’m a software engineer and I’m doing this stuff anyways. I selfishly built it for myself, just to keep track of everything, but also the goal was to build some kind of awareness. All these online petitions were kind of a joke anyways, but we thought we would try, especially since it helped us get to talk to the producer. This is kind of my way to give back to a show that kind of just disappeared.

Watch all of I’m With Busey and more at Travis’ channel here.